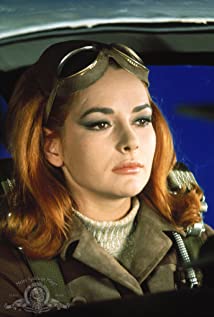 Born Kätherose Derr in Wiesbaden, Karin Dor studied acting and ballet at school and began in films as an extra. The attractive redhead made an indelible impression on Austrian director Harald Reinl (who became her first husband in 1954) and this paved the way to higher profile roles. Her first significant featured appearance was in Reinl's melodrama Der schweigende Engel (1954). Karin subsequently shared top billing in a classroom drama about wayward matriculation students, Jeugd in de branding (1954). During the initial segment of her career she played nice girls, mainly wide-eyed ingénues, innocent victims and assorted naive juveniles in war and period dramas (As Long as You Live (1955)), Heimatfilms (Almenrausch und Edelweiß (1957)) and operettas (The White Horse Inn (1960)).By 1960, a more glamorous, lithe and sensual Karin had graduated to juicer roles as heroines in Edgar Wallace potboilers (beginning with Der grüne Bogenschütze (1961)) and a series of Karl May European westerns, invariably directed by Reinl and co-starring Tarzan actor Lex Barker (a combination which proved equally successful for other crime/sci-fi franchises, including The Invisible Dr. Mabuse (1962)). Many of these pictures enjoyed only limited release and were rarely exhibited outside Germany.Karin succeeded at last to break her stereotyping by playing a pathological serial killer wielding a cutthroat razor in another Wallace/Reinl outing, Room 13 (1964), and - for a total change of pace -- essayed Brunhilde in a two-part filming of the epic 'Die Nibelungen' (also directed by Reinl). With her international appeal now widening, she appeared in The Face of Fu Manchu (1965), a British-West German co-production, as a scientist's daughter menaced by the titular villain. To follow was arguably her best-known international role as an early 'Bond girl', Helga Brandt (alias Number Eleven), a SPECTRE operative whose failure to eliminate J.B. results in her being dropped into a piranha-infested pool by super villain Blofeld (Donald Pleasence) in You Only Live Twice (1967). She was then engaged by Alfred Hitchcock for the part of Cuban resistance leader Juanita de Cordoba in Topaz (1969) in which her character came to a similarly sticky end. Karin's career never quite recovered from this director's rare box-office aberration. British Times reviewer and Hitchcock specialist John Russell Taylor described the picture as "generally flat, undistinguished, and lacking in any sign of positive interest or involvement on his (Hitchcock's) part". In the wake of Topaz, Karin's screen appearances became infrequent, except for a couple of guest spots on American crime shows, followed by an of unsuccessful feature film comeback attempt in the incongruous thriller Warhead (1977). She was latterly seen on German television in several episodes of Rosamunde Pilcher (1993). Karin's third husband was actor and stuntman George Robotham who predeceased her in 2007.

Where Do We Go Now?

The Torture Chamber of Dr. Sadism

You Only Live Twice

The Spy with Ten Faces