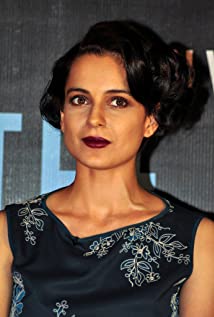 Kangana was born on 20 March 1987 in Bhambla, near Manali, which is in the Mandi district of Himachal Pradesh. Her dad Amardeep is a businessman and her mom Asha is a schoolteacher. She has two sisters and a younger brother. Her grandfather was an IAS Office. She spent her childhood in Dehra Dunand studied in DAV's High School, where she participated in many debates and elocutions and also played basketball.After completing her schooling, she attended Science College in Simla. She was enrolled in the Elite School of Modeling and also tried theater acting in Delhi and was a member of the Smita Theater Group under Arvind Gaur. She is also a trained Kathak dancer.She decided to relocate to Bombay and lived in a flat in Yari Road, Versova. In September 2005 she was spotted drinking coffee in a cafe by filmmaker Anurag Basu, who approached her and eventually signed her for a lead role in Gangster (2006).Since then, Kangana Ranaut has won three National Awards for her performance in _Fashion (2008)_qv, _Queen (2014)_qv, and _Tanu Weds Manu Returns (2015)_qv.

Manikarnika: The Queen of Jhansi