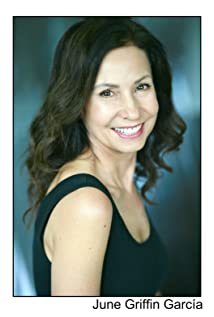 Multilingual actress and casting director June Griffin Garcia has worked in Italy, London and Mexico City, is fluent in Spanish, proficient in French and Italian and struggles mightily with Mandarin Chinese. Thanks to her international background, postgraduate studies and general rootlessness, June tends to book intense, cerebral roles in many ethnicities but she is no stranger to action roles and does her own slaps and stunts. Her fascination with humanity and passion for connecting filmmakers and actors catalyzed for her a fast-rising spinoff career as a casting director. She has cast many Texas indie films and supplied US talent for international TV shows and commercials. June was recently awarded the Life Achievement Award at the Gulf Coast Film Festival. Her favorite reviewer is still Enrique Lopetegui: "June Griffin Garcia is perfectly cast as Aunt Kay Garza, the personification of sexy, tough love."