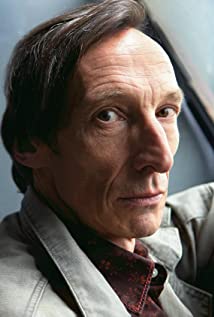 Julian Richings was born in Oxford, England, and has become a familiar figure to Canadian cinema and television audiences, appearing in over 50 films and 20 separate television series.After training in drama at the University of Exeter and touring North America with a British stage production, Mr. Richings moved to Toronto, Canada in 1984. Within five years, he had become a regular on the second season of the Canadian War of the Worlds (1988) TV series. Other roles followed, and he gained critical acclaim as the bitter, aging punk rock legend Bucky Haight in Bruce McDonald's mock-documentary Hard Core Logo (1996). His appearance in Vincenzo Natali's Cube (1997) was brief, but definitely memorable. In 2000, Mr. Richings appeared as Francis Bellanger, an itinerant railroad worker who falls in love with a prostitute (played by Shirley Henderson), in The Claim (2000), and the role earned him a Genie Award nomination for best supporting actor. His performance as the nearly-blind security guard Otto in Stephen King's Kingdom Hospital (2004) was considered especially impressive by many critics. A busy stage actor as well, Mr. Richings was presented with two Dora Awards in the late 1980s and continues to perform professionally in the Toronto area. He tends to appear in small, experimental theaters and has been known to work for free if he thinks the material is interesting enough. In addition to acting, Mr. Richings has taught seminars and classes on acting and on movement for actors in the Toronto area for nearly twenty years. Mr. Richings is married and has two children. He resides with his family in Toronto.