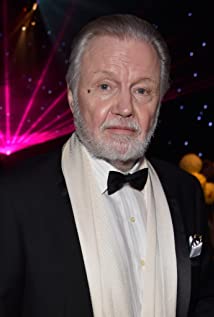 Jon Voight is an American actor of German and Slovak descent. He has won the Academy Award for Best Actor in a Leading Role for his role as paraplegic Vietnam War veteran Luke Martin in the war film "Coming Home" (1978). He has also been nominated for the same award other two times. He was first nominated for his role as aspiring gigolo Joe Buck in "Midnight Cowboy" (1969), He was last nominated for the award for his role as escaped convict Oscar "Manny" Manheim in "Runaway Train" (1985). He was also nominated for the Academy Award for Best Actor in a Supporting Role, for his role as sports journalist Howard Cosell (1918-1995) in "Ali" (2001).In 1938, Voight was born in Yonkers, New York. His parents were professional golfer Elmer Voight (original name Elemír Vojtka) and his wife Barbara Kamp. His paternal grandfather was a Slovak immigrant, as were the parents of his paternal grandmother. His maternal grandfather was a German immigrant, as were the parents of his maternal grandmother. His maternal great-uncle was political activist Joseph P. Kamp (1900-1993), a leader of the anti-communist organization "Constitutional Educational League".Voight has two siblings: volcanologist Barry Voight (1937-) and singer-songwriter James Wesley Voight (pseudonym Chip Taylor, 1940-). Barry is most famous for first predicting and then investigating the eruption of Mount St. Helens (1980). James is most famous for writing the hit songs "Wild Thing" (1965) and "Angel of the Morning" (1967).Voight was educated at Archbishop Stepinac High School, an all-boys Roman Catholic high school located at White Plains, New York. At the time, the school was operated by the Roman Catholic Archdiocese of New York. He took an interest in acting in his high school years, performing a comedic role in the school's annual musical, "The Song of Norway". He graduated in 1956, at the age of 18.Voight continued his education at The Catholic University of America, located in Washington, D.C.. He majored in art, and graduated in 1960. He was 22-years-old at the time of graduation. He then moved to New York City, having decided to pursue an acting career.In the early 1960s, Voight primarily worked as a television actor. He guest starred in episodes of then-popular television series, such as "Naked City", "The Defenders", "NET Playhouse", "12 O'Clock High", and "Gunsmoke". His first notable theatrical role was playing the illegal immigrant Rodolfo in a 1965 Off-Broadway production of the play "A View from the Bridge" (1955) by Arthur Miller (1915-2005). In the play, Rodolfo is the love interest of the American girl Catherine, and disliked by her uncle and guardian Eddie Carbone (who is in love with his niece).Voight made his film debut in the superhero comedy "Fearless Frank" (1967), playing the role of the eponymous superhero. Frank was depicted as a murder victim who gets resurrected and granted superpowers by a scientist. Voiight's second film role was playing historical gunman and outlaw Curly Bill Brocius (1845-1882) in the Western film "Hour of the Gun" (1967). The historical Brocius was an an enemy of the Esrp family, and was killed by Wyatt Earp (1848-1929).Voigh't third film appearance was "Midnight Cowboy" (1969), his first great success. He played the role of a naive hustler from Texas who tries to become a gigolo in New York City. The film was critically acclaimed, and became the only X-rated feature to win Best Picture at the Academy Awards. Voight was nominated for the Academy Award for Best Actor, but the award was instead won by rival actor John Wayne (1907-1979).Voight's first role in the 1970s was playing lieutenant Milo Minderbinder in the black comedy "Catch-22" (1970). The film was based on a 1961 satirical novel by Joseph Heller (1923-1999), and offered a satirical view on war and bureaucracy. Voight's next role was playing the left-wing student A in the political drama "The Revolutionary" (1970).Voight found further critical acclaim with the thriller film "Deliverance" (1972), playing Atlanta businessman Ed Gentry. In the film, Gentry and his first are targeted by villainous mountain men in the northern Georgia wilderness. The film earned about 46 million dollars at the domestic box office, and was nominated for the Academy Award for Best Picture.His subsequent roles included idealistic schoolteacher Pat Conroy in "Conrack" (1974), journalist Peter Miller in "The Odessa File" (1974). His next great success was playing paraplegic war veteran Luke Martin in "Coming Home" (1978), in a role inspired by the life of war veteran and anti-war activist Ron Kovic (1976-). He won the Academy Award for Best Actor for this film. His co-star Jane Fonda (1937-) won her second Academy Award for Best Actress for her role in this film.Voight's early 1980s roles included conman Alex Kovac in "Lookin' to Get Out" (1982) and widowed father J. P. Tannen in "Table for Five" (1983). His next big success was the role of escaped convict Oscar "Manny" Man

I Am Burt Reynolds