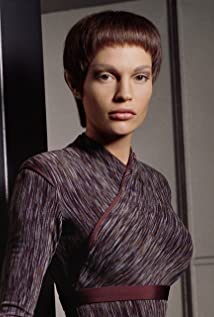 Jolene Blalock was born and raised in San Diego, California. At age 16, she left home to pursue a modeling career in Europe and Asia. It was on a 1998 trip back to the United States that Blalock was compelled to flex her untested acting skills, and after a few commercial appearances and some skill-sharpening at Stella Adler Academy and Toronto's Second City Improv and Second City Los Angeles, she made her acting debut on NBC's Veronica's Closet (1997). Already comfortable in front of the camera, Blalock's magnetism shined through the lens and she was soon cast as Medea in the made-for-TV movie Jason and the Argonauts (2000) alongside acting greats Dennis Hopper and Frank Langella. Blalock is best know for her role as the Vulcan Sub-Commander T'Pol on Star Trek: Enterprise (2001). In 2004, Blalock signed on to film Slow Burn (2005), opposite Ray Liotta. She then went on to play Captain Lola Beck in Starship Troopers 3: Marauder (2008). Blalock has guest-starred on the television series, House (2004), CSI: Crime Scene Investigation (2000), CSI: Miami (2002) and Lost (2004). She is married to Michael Rapino, CEO and President of Live Nation.

Jason and the Argonauts