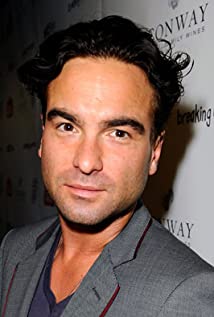 John Mark Galecki was born in Bree, Belgium, to American parents; his father was stationed there while serving in the U.S. Air Force. When he was three years old, his family moved to Chicago, Illinois, where he grew up with his parents, Mary Lou and Richard Galecki, and siblings, sister Allison (1980) and brother Nick (1982). His father was of Polish descent, and his mother's ancestry is Irish and Italian. His mother was a mortgage consultant and his father became a teacher for blind veterans in a VA hospital outside of Chicago. When Galecki was sixteen, his father died in an accident.His mother recalled in an interview with People magazine that Galecki was a very artistic kid; at only 4 years old, he told her: "Mom, I'm gonna be on T.V., and I don't mean when I grow up." Two years later, when their attempts to distract him with sports failed, Galecki's parents took him to open auditions at local theaters in Chicago. He landed his first role in "Fiddler on the Roof," and more parts in other productions followed. By age 11, he was already known as an excellent actor in Chicago's theater scene evidenced by him receiving a Joseph Jefferson Citation nomination for portraying John Henry in "The Member of the Wedding."In 1989 he was cast in his first movie, a holiday film called Prancer (1989), but his big break was in another Christmas movie as Chevy Chase's son Rusty Griswold, in National Lampoon's Christmas Vacation (1989). On the set, Chase took a liking to him, and Galecki recalled in a later interview that Chevy Chase showed him some tricks for comedic timing.By that time, his whole family had moved from Chicago to L.A. to support his career. But within 10 months they realized they missed Chicago too much, and moved back home. Galecki, still just 14, was under contract on a show with Robert Urich called "American Dreamer (1990)", so he stayed in L.A. Although he was living alone in a studio apartment, he never got into trouble and was a good kid. He recalled living alone in L.A. without adult supervision as "not fun" and "quite intimidating and lonely, to be honest. But I've always been happiest when I'm working, so..." He bought a motorcycle with a mirrored helmet so he could get to work and back, at Paramount studios.In 1991 Galecki was picked by Roseanne Barr to play her son in the made for T.V. movie Backfield in Motion (1991). She liked him so much she asked him to come on her sitcom for what started as a one-off appearance, but soon turned into the important recurring role of David Healy. His family was religious viewers of the show and he was somewhat intimidated at first to be working with his television heroes. However, before long, it was his heroes that praised him: Roseanne said he showed "great vulnerability." John Goodman said: "If he was one of those little stuffed bears at a carny, he'd have a Wuv me t-shirt on. People just want to take care of him." Galecki also became very close friends with co-star Sara Gilbert and the show's executive producer Eric Gilliland.After Roseanne (1988) he worked on a number of diverse roles, from funny Ira alongside Christopher Walken in the 1997 dark-comedy Suicide Kings (1997) to a drug-addicted student in 2003's Bookies (2003), and he played gay characters in Don Roos's Bounce (2000) and The Opposite of Sex (1997). He never stayed far from the television industry as he made guest appearances such as Laurie Freeman's younger lover in Norm (1999) (where he once again worked with Laurie Metcalf, his former Roseanne cast mate), as a golfer in My Name Is Earl (2005), as Hope & Faith (2003)'s younger brother in the sitcom of the same name, and as hilarious party-boy Trouty on My Boys (2006). In 2006 he returned to his theater roots as he took on the role of conflicted but sweet male escort Alex in Douglas Carter Beane's play "The Little Dog Laughed," for which he received a 2007 Theatre World Award for Outstanding Browdway Debut.In 2007 he was back on the small screens, starring as Leonard Hofstadter in the sitcom The Big Bang Theory (2007). Not only was Chuck Lorre, a former producer for Roseanne, a producer of the new show, but Sara Gilbert and Laurie Metcalf both made guest appearances.Galecki is a self-admitted motorcycle "nerd," and drives a Harley Davidson Softail Deluxe. Although he never went to college, he has said: "I'm not dead! We should never stop learning. We should never stop absorbing," and so he learned how to play the cello in his early twenties. He likes traveling around the world, painting, music (he also plays bass), and hiking with his dog Vera.He always has been very private about his personal life and little is known about past relationships. It has only been confirmed that he dated actresses Laura Harris and Kaley Cuoco. He isn't on twitter, and Galecki once said, "I don't understand the current frame of mind in our society that seems to say that any action is not of value until it's broadcast somehow."He still lives in Los Angeles bu