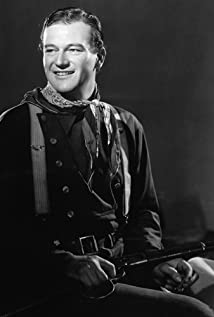 John Wayne was born Marion Robert Morrison in Iowa, to Mary Alberta (Brown) and Clyde Leonard Morrison, a pharmacist. He was of English, Ulster-Scots, and Irish ancestry.Clyde developed a lung condition that required him to move his family from Iowa to the warmer climate of southern California, where they tried ranching in the Mojave Desert. Until the ranch failed, Marion and his younger brother Robert E. Morrison swam in an irrigation ditch and rode a horse to school. When the ranch failed, the family moved to Glendale, California, where Marion delivered medicines for his father, sold newspapers and had an Airedale dog named "Duke" (the source of his own nickname). He did well at school both academically and in football. When he narrowly failed admission to Annapolis he went to USC on a football scholarship 1925-7. Tom Mix got him a summer job as a prop man in exchange for football tickets. On the set he became close friends with director John Ford for whom, among others, he began doing bit parts, some billed as John Wayne. His first featured film was Men Without Women (1930). After more than 70 low-budget westerns and adventures, mostly routine, Wayne's career was stuck in a rut until Ford cast him in Stagecoach (1939), the movie that made him a star. He appeared in nearly 250 movies, many of epic proportions. From 1942-43 he was in a radio series, "The Three Sheets to the Wind", and in 1944 he helped found the Motion Picture Alliance for the Preservation of American Ideals, a Conservative political organization, later becoming its President. His conservative political stance was also reflected in The Alamo (1960), which he produced, directed and starred in. His patriotic stand was enshrined in The Green Berets (1968) which he co-directed and starred in. Over the years Wayne was beset with health problems. In September 1964 he had a cancerous left lung removed; in March 1978 there was heart valve replacement surgery; and in January 1979 his stomach was removed. He received the Best Actor nomination for Sands of Iwo Jima (1949) and finally got the Oscar for his role as one-eyed Rooster Cogburn in True Grit (1969). A Congressional Gold Medal was struck in his honor in 1979. He is perhaps best remembered for his parts in Ford's cavalry trilogy - Fort Apache (1948), She Wore a Yellow Ribbon (1949) and Rio Grande (1950).

The Battle of the Sexes

Phil Ochs: There But for Fortune