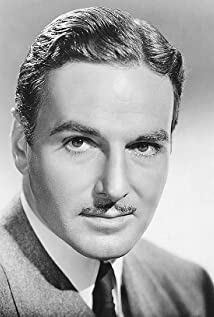 Of British parentage, John Sutton was born in Rawalpindi, India (now part of Pakistan), on October 22, 1908. After graduating from Wellington College, he spent a decade or so working in various British colonies, including several in Africa, as a hunter, rancher and tea plantation manager. An avid wanderlust adventurer in the same vein as Errol Flynn (with whom he worked in The Adventures of Robin Hood (1938)) during his pre-Hollywood days, Sutton lived all over the world, including China, Malaya and the Philippines. He somehow arrived in Hollywood in the mid-'30s as a technical consultant on films with a British Empire background. He was a dark, handsome man and, eventually, this caught directors' eyes and he was placed in front of the camera. Making an unbilled debut in The Last of the Mohicans (1936), he apprenticed in a number of bit roles for a couple of years, including a minor running part in the "Bulldog Drummond" series from 1937-1939. Unlike Flynn, however, this slick-looking actor had more slivery eyes to match his slivery mustache and a shadier countenance. For most of his career he would find himself more on the cruel end of a romantic triangle. As the "other man" or hero's adversary, he was shown at his best as flashy, slimy swashbucklers who met their fate at the end of the sword in the final reel. He peaked in the 1940s at 20th Century-Fox, where he carved out quite a nasty niche for himself in such films as Hudson's Bay (1940), Jane Eyre (1943), Captain from Castile (1947), Adventures of Casanova (1948), The Three Musketeers (1948), Bride of Vengeance (1949) and The Fan (1949). Occasionally he was asked to play a lead, particularly at a time when all the romantic male stars were serving their country during WWII, in films such as Moon Over Her Shoulder (1941) and Tonight We Raid Calais (1943). In the 1950s his film career waned and he took on TV roles. Sutton died suddenly in August of 1963 of a heart attack in Cannes, France, at the age of 54, shortly after finishing work on Of Human Bondage (1964) in England.

Return of the Fly

Death of a Scoundrel