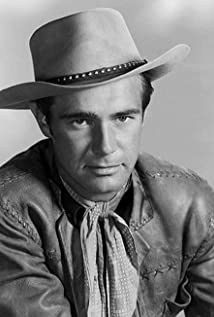 Genial, fair-haired and boyishly handsome, lanky actor John Lupton's biggest claim to fame was as the co-star of the western TV series Broken Arrow (1956). A reliable actor, if not particularly distinctive, he enjoyed a four-decade-long career on stage, film and TV. Born on August 22, 1928, in Highland Park, Illinois, the son of a newspaper writer, Lupton was raised in Milwaukee where he settled on pursuing an acting career after appearing in a couple of high school plays. He began paying his dues with a local stock company and also performed children's theater. He eventually trained at the American Academy of Dramatic Arts.Lupton made his Broadway debut in a minor part in the Mae West showcase "Diamond Lil" (1949), and subsequently co-starred with Susan Peters in "The Glass Menagerie", then was cast in the Katharine Hepburn 1950 tour of "As You Like It. It was Hepburn who helped introduce him to films...and MGM.As a Metro contract player, Lupton found the going rough, playing bit parts as a spear-carrier in Julius Caesar (1953) and a village idiot in Scandal at Scourie (1953). After two years the studio declined to pick up his option and Lupton began to freelance. One of his better roles was in support of Tab Hunter Battle Cry (1955) in which he played a young soldier who is killed in battle just after learning his girl back home, played by Anne Francis, was prostituting herself. He went on to appear as a rookie type in a number of late 1950s action-oriented yarns, including The Great Locomotive Chase (1956), Drango (1957), Taming Sutton's Gal (1957), Gun Fever (1958) and The Man in the Net (1959). In a departure from the norm, Lupton later found an isolated film lead playing the famous outlaw in the witless cult horror entry Jesse James Meets Frankenstein's Daughter (1966).The actor found earnest roles in TV dramatic showcases as well, such as Robert Montgomery Presents (1950), Playhouse 90 (1956) and Studio One (1948). All this culminated in the "Broken Arrow" TV series in which Lupton played government agent Tom Jeffords, a role originated by James Stewart in the 1950 feature film of the same name, endeavoring to keep the peace between white settlers and Apaches and their honorable and charismatic chief, Cochise, (played by Michael Ansara).Lupton's career maintained its pace into the next decade as a result of his long-running role as Tommy Horton on the daytime soap Days of Our Lives (1965), as well as in commercials and in a slew of made-for-TV movies. He also guested on such popular programs as Wagon Train (1957), Gomer Pyle: USMC (1964), The F.B.I. (1965), Ironside (1967), Kung Fu (1972), Cannon (1971), Harry O (1973), Charlie's Angels (1976), The Rockford Files (1974) and B.J. and the Bear (1978).Lupton's first marriage, which produced a daughter, ended in divorce. A second marriage to Dian Friml, the granddaughter of "The Vagabond King" composer Rudolf Friml, lasted until his death. He was seen less and less into the 1980s and later found full-time employment with a computer firm, appearing in guest roles on the sly. Volunteer work included serving with the Multiple Sclerosis Association and the Special Olympics.John Lupton's last film, Body Shot (1994), was released the year of his death. He died of undisclosed causes on November 3, 1993, at age 65. Wife Dian died in 2005.