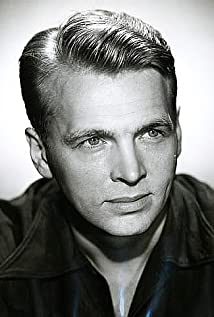 One of six children born to an immigrant Norwegian glassblower, John Lund had a rather unsettled childhood. He dropped out of school at the age of 14. For a while, he tried his hand at several part-time jobs but never stayed long. He then devised various entrepreneurial ways to generate an income, including a quit-smoking program (a fairly novel idea at the time) and a mail order manual on mind-reading (!). Unsurprisingly, none of these ventures caught on. On the off-chance, Lund then got a small part in a local Rochester production in the Clifford Odets play "Waiting for Lefty". He went on from there to work in summer stock, eventually made his way to New York and finagled another small theatrical role while working at the 1939 World's Fair. For the next two years -- still restless -- Lund alternated jobs in advertising with acting and writing for radio.In October 1941, he landed a plum role on Broadway in "As You Like It" and the following year penned both book and lyrics for the successful musical revue "New Faces of 1943". A much acclaimed leading role in the Bretaigne Windust production of "The Hasty Heart" followed in January 1945 and led to a six-year contract with Paramount. For the blue-eyed, saturnine, Nordic-looking Lund, the beginning of his career as a Hollywood leading man would also be his apex. He was at his best playing the dual role of an ill-fated World War I flying ace romancing Olivia de Havilland (subsequently, he played her grown-up illegitimate son in To Each His Own (1946)). Lund was also effectively cast as the romantic interest for both Marlene Dietrich and Jean Arthur in A Foreign Affair (1948).There were further good roles to come: Lund showed unexpected comedic flair in the madcap farce Miss Tatlock's Millions (1948) as a Hollywood stunt man posing as an eccentric relative to help beleaguered heiress Wanda Hendrix against predatory gold-diggers. He gave reliable support to Barbara Stanwyck in the underrated melodrama No Man of Her Own (1950) and co-starred with Gene Tierney as one of newlyweds facing class barriers in The Mating Season (1951) (though Oscar-nominated Thelma Ritter as Lund's outspoken mother walked away with the acting honors for this one). By the end of 1951, Lund's star was in decline. He was briefly signed at Universal, but relegated to appearing primarily in routine westerns. His final major appearance was as George Kittredge, the stuffy fiancée who doesn't get the girl - this being Grace Kelly in her acting swansong High Society (1956).Lund persisted for several more years on CBS radio as the titular insurance investigator of "Yours Truly, Johnny Dollar", a role he made his own between November 1952 and September 1954. He appeared in largely forgettable films thereafter and retired from acting altogether by 1963. In the end, he seems to have succeeded in setting up a moderately successful business and spent his remaining years at his house in Coldwater Canyon (Hollywood Hills) where he died in May 1992.

If a Man Answers

The Battle at Apache Pass

Darling, How Could You!