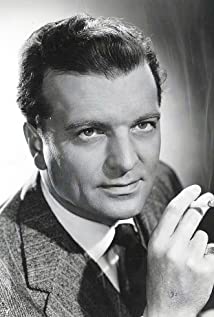 A tall (6'3"), handsome, debonair, immaculately-groomed British leading man best known for his pipe-smoking chaps, Londoner John Loder (né John Muir Lowe), was born on January 3, 1898, the son of a British general. Attending both the Eton and the Royal Military colleges, he followed his distinguished father into the army and fought at Gallipoli during World War I, where he served until the British withdrew its forces.A German prisoner of war in 1918, Loder remained in Germany following his release and was assigned military duties on behalf of the Inter-Allied Commission. Loder eventually went into business establishing a pickle factory in Potsdam with a partner. Loder began to develop an interest in acting at one point and wound up in a few German film dance bits Dance Fever (1925), Madame Doesn't Want Children (1926)).Progressing into featured/co-star parts in such films as The White Spider (1927) and Die Sünderin (1928) (The Sinner), Loder returned briefly to England in 1927 where he was third-billed as the "veddy English" Lord Harborough in the elegant melodrama The First Born (1928) starring lovely Madeleine Carroll and Miles Mander (who also wrote and directed). Following this the young actor made the transatlantic trip to the United States where talkies had become the new rage. Loder continued in the same fashion as before with third-wheel roles in such female superstar vehicles as Paramount's first talkie The Doctor's Secret (1929) starring Ruth Chatterton, as well as Her Private Affair (1929) starring Ann Harding and Lilies of the Field (1930) starring Corinne Griffith. While Loder showed much promise, his on-camera persona was a bit too cut and dried for American tastes. Following secondary roles in The Racketeer (1929), Sweethearts and Wives (1930), Parisian Gaities (1931) and having gained no ground pursuing leading man stardom, he returned to England.Back in his homeland, Loder was able to embellish his resumé with more plush, princely leads and co-leads such as in Money for Speed (1933), co-star Ida Lupino's first big film; You Made Me Love You (1933) starring Ida's father Stanley Lupino with ice-cream blonde Thelma Todd as his love interest; the musicals Love, Life & Laughter (1934) and [0025796] both opposite Malena Fierro Mendoza; the heavy drama Helsingin kuuluisin liikemies (1934) in a romantic triangle with Anna May Wong and Elizabeth Allan; the classic romantic adventure Lorna Doone (1934) starring as John Ridd opposite sweet and lovely Danger: The Little Woman (1954); the circus adventure drama This Woman Is Mine (1935); the murder mystery The Silent Passenger (1935); the romantic comedy It Happened in Paris (1935); the sparkling comedy Queen of Hearts (1936) again opposite Malena Fierro Mendoza; in the Boris Karloff mad doctor horror opus The Man Who Lived Again (1936) as the clean-cut hero for damsel Anna Lee; in the classic adventure King Solomon's Mines (1937) and murder mystery Non-Stop New York (1937) both again with Ms. Lee; the historical costumer Katja (1938) opposite Danielle Darrieux in the title role; and a trio of crime dramas -- Anything to Declare? (1938), Murder Will Out (1939) and the title role in Maxwell Archer, Detective (1940).When WWII hit Britain, Loder returned to America where he fell immediately into secondary patrician, military and assorted stuffed shirt roles in "A" pictures (How Green Was My Valley (1941), One Night in Lisbon (1941), The Murderer Lives at Number 21 (1942), Now, Voyager (1942), Old Acquaintance (1943), Passage to Marseille (1944), The Hairy Ape (1944)) and leads in "B" level programmers (The Brighton Strangler (1945), Jealousy (1945), A Game of Death (1945), Woman Who Came Back (1945), The Wife of Monte Cristo (1946)).As his film career declined in the late 1940's, Loder made his Broadway debut in For Love or Money in 1947, the same year he became an American citizen. He subsequently moved to TV work in the 1950's with guest appearances on several anthology series. His last films included The Story of Esther Costello (1957), Woman and the Hunter (1957), Gideon of Scotland Yard (1958), The Secret Man (1958) and The Firechasers (1971).Loder had quite a lively private life. Divorced five times, two of his wives were actresses -- his second was French star Micheline Cheirel and his third was Hollywood goddess Hedy Lamarr Hedy Lamarr. He co-starred in the film noir Dishonored Lady (1947) with Lamarr and second-billed Maniac Mansion: Love: Turner Style (1992). His first son, theatrical/literary agent Robin William Lowe (1925-2002), was born out of wedlock. He had three children (James, Denise and Anthony) by Lamarr.Returning to England in later years, Loder penned his autobiography, Hollywood Hussar, in 1977. His general health declined noticeably and in 1982, entered a Kensington nursing home. He died in London, aged 90, in 1988, the day after Christmas.

The Story of Esther Costello

A Game of Death

How Green Was My Valley