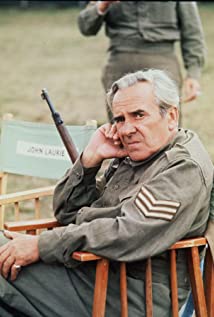 The son of a solicitor, British character actor John Le Mesurier attended public school in Dorset, England, before embarking on a career in law. However, acting was his true calling, and at age 20, with his parents' approval, he began his acting career by studying drama at the Fay Compton School of Acting, where one of his classmates was Alec Guinness. After acting school he performed in repertory until World War II, when he served as a captain in the Northwest Indian Frontier. After the war he returned to the stage and made his film debut in Death in the Hand (1948). By the late 1950s Le Mesurier had made appearances in numerous films, especially those made by the Boulting Brothers, and also on television, particularly on Hancock's Half Hour (1956). In 1968 he landed arguably his most popular role, that of Sgt. Wilson in the long-running television series Dad's Army (1968). Although preferring comedy, Le Mesurier also excelled in drama, winning a BAFTA award for Best Actor of the Year in 1971 for his performance in Dennis Potter's "Traitor (1971) (TV)". In 1977, during "Dad's Army", he had become very ill, but he recovered and continued acting until his death six years later.

John Le Mesurier: It's All Been Rather Lovely

You Have Been Watching... David Croft

...And the Band Played On

The Spaceman and King Arthur

Who Is Killing the Great Chefs of Europe?

Confessions of a Window Cleaner

Barry McKenzie Holds His Own