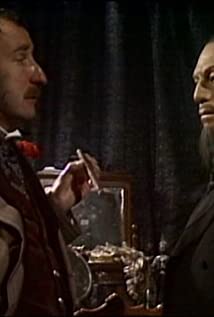 The lean, rather emaciated-looking John Bennett studied acting at the Central School of Speech and Drama in London. After years in repertory theatre, he made his feature debut in 1960, and, thereafter, appeared regularly on British screens. He was prone to perform in diverse ethnic guises, often adopting heavy make-up and using his penchant for accents and dialects. One of his first notable appearances was as the evil Injun Joe in the BBC children's series The Adventures of Tom Sawyer (1960). He came to be much in demand for crime-time TV series, like The Avengers (1961), The Saint (1962) and Z Cars (1962), effortlessly switching from menacing roles to law enforcement.In feature films, he was generally confined to background support, except for his titular lead in the little-seen drama The Barber of Stamford Hill (1963). He also provided an effective thread connecting the various vignettes of The House That Dripped Blood (1971), as the sceptical investigating Chief Inspector. Bennett also appeared as Joseph Goebbels in Hitler: The Last Ten Days (1973), French Prime Minister Georges Clemenceau in the excellent miniseries Fall of Eagles (1974), and as Greek historian and philosopher Xenophon in I, Claudius (1976). He twice guested in Doctor Who (1963), giving one of his most indelible performances as the Fu Manchu look-alike, Li H'sen Chang, an evil Chinese magician and hypnotist roaming Victorian-era London in search of victims to aid in his master's reincarnation, in "The Talons of Weng-Chiang". Bennett managed to avoid the pitfalls of caricature and gave a thoroughly convincing performance, managing to portray the arch villain with dignity and, ultimately, even a degree of sympathy.In addition to his work on screen, Bennett remained an exceedingly busy stage performer, at once in classical roles at the National Theatre and with the Royal Shakespeare Company, and in West End revivals of noted musicals like "The King and I" (1979) and "The Sound of Music" (1981).

Seven Wonders of the Industrial World

The Infinite Worlds of H.G. Wells

Jason and the Argonauts