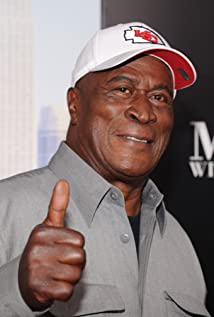 A native of New Jersey and son of a mechanic, African-American John Amos has relied on his imposing build, eruptive nature and strong, forceful looks to obtain acting jobs, and a serious desire for better roles to earn a satisfying place in the annals of film and TV. He has found it a constant uphill battle to further himself in an industry that tends to diminish an actor's talents with severe and/or demeaning stereotypes and easy pigeonholing. A tough, often hot-headed guy with a somewhat tender side, John would succeed far better on stage than on film and TV...with one extremely noteworthy exceptions.Born on December 27, 1939, John was first employed as an advertising copywriter, a social worker at New York's Vera Institute of Justice, and an American and Canadian semi-professional football player before receiving his calling as an actor. A stand-up comic on the Greenwich Village circuit, the work eventually took him West and, ultimately, led to his hiring as a staff writer on Leslie Uggams' musical variety show in 1969. Making his legit stage debut in a 1971 L.A. production of the comedy "Norman, Is That You?", John went on to earn a Los Angeles Drama Critics nomination for "Best Actor". As such, he formed his own theater company and produced "Norman, Is That You?" on tour.The following year he returned to New York to take his first Broadway bow in "Tough To Get Help". By this time he had secured secondary work on the classic The Mary Tyler Moore Show (1970) as Gordy the weatherman. His character remained on the periphery, however, and he left the show after three discouraging seasons. On the bright side, he won the recurring role of the sporadically-unemployed husband of maid Florida Evans (played by Esther Rolle) on Norman Lear's Maude (1972) starring Bea Arthur. The two characters were spun-off into their own popular series as the parental leads in Good Times (1974).Good Times (1974), a family sitcom that took place in a Chicago ghetto high-rise, initially prided itself as being the first network series ever to be created by African-Americans. But subsequent episodes were taken over by others and John was increasingly disgruntled by the lack of quality of the scripts and the direction Lear was taking the show. Once focused on the importance of family values, it was shifting more and more toward the silly antics of Jimmie Walker, who was becoming a runaway hit on the show as the aimless, egotistical, jive-talking teenage son JJ. John began frequently clashing with the higher-ups and, by 1976, was released from the series, with his character being killed in an off-camera car accident while finding employment out of state.Amos rebounded quickly when he won the Emmy-nominated role of the adult Kunte Kinte in the ground-breaking epic mini-series Roots (1977), one of the most powerful and reverential TV features ever to hit television. It was THE TV role of his career, but he found other quality roles for other black actors extremely difficult to come by. He tried his best to avoid the dim-headed lugs and crime-motivated characters that came his way. Along with a few parts (the mini-movie Willa (1979) and the films The Beastmaster (1982) and Coming to America (1988)), he had to endure the mediocre (guest spots on The Love Boat (1977), "The A-Team", "Murder, She Wrote" "One Life to Live"). John also toiled through a number of action-themed films that focused more on grit and testosterone than talent.He found one answer to this acting dilemma on the proscenium stage. In 1985, the play "Split Second" earned him the NAACP Award as Best Actor. He also received fine reviews in a Berkshire Theater festival production of "The Boys Next Door", a tour of O'Neill's towering play "The Emperor Jones", and in a Detroit production of Athol Fugard's "Master Harold...and The Boys". In addition, John directed two well-received productions, "Miss Reardon Drinks a Little" and "Twelve Angry Men", in the Bahamas. He took on Shakespeare as Sir Toby Belch in "Twelfth Night" at Joseph Papp's New York Shakespeare and earned strong notices in the late August Wilson's Pulitzer Prize-winning play "Fences" at the Capital Repertory Company in Albany, New York. Overseas he received plaudits for his appearance in a heralded production of "The Life and Death of a Buffalo Soldier" at the Bristol's Old Vic in England. Capping his theatrical career was the 1990 inaugural of his one-man show "Halley's Comet", an amusing and humanistic American journey into the life of an 87-year-old who recalls, among other things, World War II, the golden age of radio, the early civil rights movement, and the sighting of the Comet when he was 11. He wrote and has frequently directed the show, which continues to play into the 2007-2008 season.In recent years, John has enjoyed recurring parts on "The West Wing" and "The District", and is more recently appearing in the offbeat series Men in Trees (2006) starring Anne Heche. John Amos has two children by his forme

Bad Asses on the Bayou