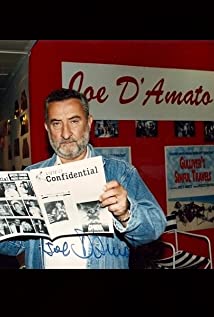 Joe D'Amato was born Aristide Massaccesi on December 15, 1936, in Rome, Italy. At age 14 he began working for his father, a chief electrician and later the founder of the company A.C.M. By going to school in the daytime, Massaccesi worked afternoons part-time as a stagehand and stage cameraman around various film sets. After attending grade school, from 1953-57, Massaccesi worked for his father. Mole Richardson, another motion picture company, was looking for someone to work as an assistant cameraman and Massaccesi jumped at the opportunity. Starting in 1969 he worked as director of photography as well as assistant director for a number of films until 1974. His first directing work was in 1972's low-budget Stay Away from Trinity... When He Comes to Eldorado (1972), co-directed by Diego Spataro, under the pseudonym Dick Spitfire, but it was a commercial failure. Later that same year Massaccesi directed a western (under the name of Oskar Faradine). He then used his assistant's name, Romano Gastaldi, for his next film, Fra' Tazio da Velletri (1973), as well as a few others.Massaccesi was reluctant to use his real name early in his directing career, since he was still known mainly as a director of photography and didn't want his directing jobs to jeopardize his cinematography career. He used his real name for screenplay and cinematography roles, but worked under many aliases (such as Michael Wotruba) to disguise the authorship of some films in order not to mix up the different genres of comedy, western, drama, thrillers and others. He used so many phony names that he may well have more pseudonyms credited to him than any other director in the world.Massaccesi entered the horror genre with Death Smiles on a Murderer (1973) under his real name, which inspired him to make other gothic horror films. Under a new pseudonym, Joe D'Amato, he directed soft-core, erotic films starring Laura Gemser, such as Emanuelle and Francoise (1975), Emanuelle and the Last Cannibals (1977), Emanuelle in America (1977), Erotic Nights of the Living Dead (1980) and others. He also directed such action films as Tough to Kill (1979).Massaccesi, now referring to himself as Joe D'Amato, entered the "gore" genere films with Beyond the Darkness (1979), which remains his most successful horror film, shot in four weeks on a low budget entirely at a villa near Bressanone and which had an excellent music soundtrack by the rock group Goblin. His next horror film, but less successful than the previous one, was Anthropophagus: The Grim Reaper (1980), directed as "Peter Newton". The film starred Tisa Farrow, sister of Mia Farrow and the star of Nightmare Island (1979), another gore genre flick.During the 1980s and 1990s D'Amato directed over 100 hardcore porn sex films for the Italian video market, although under his many pseudonyms he continued to direct and produce other films. One of them was StageFright (1987) directed by Michele Soavi on which, under his real name, Massaccesi served as producer. He then directed two "Ator the Invincible" films. He directed the violent, hardcore The Emperor Caligula: The Untold Story (1982), using the name "David Hills", a commercial exploitation (some might say "rip-off") of the successful film by Tinto Brass.D'Amato's other films during the 1980s were Paradiso Blu (1980) and violent adventure films such as Deep Blood (1990), which were filmed in Florida, and Ghosthouse (1988). Some of D'Amato's greatest successes abroad were L'alcova (1985) and 11 Days 11 Nights Part 3 (1989), as well as the horror-thriller Hitcher in the Dark (1989) (aka "Hitcher in the Dark").His long film career came to an abrupt end when, in January 1999, he suffered an unexpected and fatal heart attack at his home in Rome. He was 62. Joe D'Amato had made his mark on Italian cinema as a talented director, scriptwriter, producer and cinematographer with scores of films and more than a dozen aliases to his credit.

Dreams of a Country Girl

The House of Pleasure

The Labyrinth of Love