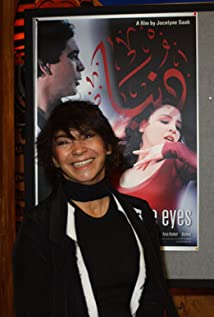 She was born and raised in Beirut, Lebanon. Her first job was hosting a pop music program on the national Lebanese radio station called "Marsipulami got blue eyes." Then she became a television newsreader. Once civil war broke out in Lebanon, Saab started working on documentary films. That led to a job as second unit director for "Circle of Deceit" directed by Volker Schlondorff in 1981, which happened to be about the Lebanese civil war. She continued to report and document on the war, but moved to Paris, France after having lost so much due to the war.2005 - She splits her time between Paris and Cairo.

Kiss Me Not on the Eyes

Beirut Is No Longer Never