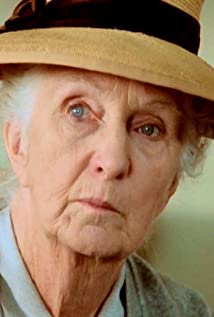 Joan Hickson was born in 1906 at Kingsthorpe, Northampton. Her stage career began with provincial theater in 1927, going on to a long series of West End comedies, usually playing the part of a confused or eccentric middle-age woman. She performed at the Regent's Park Open Air Theatre, at the time London was subject to World War II bombing. Her work gradually included screen roles: The Outsider (1948), The Promoter (1952), The 39 Steps (1959) - over 80 movies in all - but her stage career continued, with parts in three Peter Nichols plays, Noël Coward's "Blithe Spirit" (1976) and and a Tony award supporting actress performance in Alan Ayckbourn's "Bedroom Farce" (1977). Her first Agatha Christie role was "Miss Pryce" in the play, "Appointment With Death" (1946), which prompted Christie, herself, to write "I hope you will play my dear Miss Marple". She began playing this, her best known part, in her late 70s, in a BBC television series which ran from 1984 to 1992. A Miss Marple fan, Queen Elizabeth II, awarded her the Order of the British Empire in 1987. After the series closed, Joan recorded audio books of the Christie mysteries. She died, aged 92, in a hospital at Colchester, Essex, survived by a son and daughter (her physician husband Eric Butler died in 1967).

Agatha Christie's Miss Marple: The Mirror Crack'd from Side to Side

Agatha Christie's Miss Marple: They Do It with Mirrors

Agatha Christie's Miss Marple: The Murder at the Vicarage

Miss Marple: A Murder Is Announced

Agatha Christie's Miss Marple: The Body in the Library