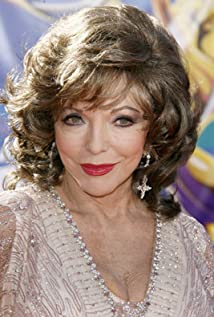 Joan Collins is an English actress from Paddington, London. She is most famous for playing the role of vengeful schemer Alexis Carrington Colby in the soap opera "Dynasty" (1981-1989). In 1997, Collins was appointed an Officer of the Order of the British Empire (OBE) for services to drama. In 2015, Collins was promoted to the rank of Dame Commander of the Order of the British Empire (DBE) for services to charity.Collins was the daughter of talent agent Joseph William Collins (1902-1988) and his wife, dance teacher Elsa Bessant, (1906-1962). Joseph was born in South Africa, and had Jewish descent. As a talent agent, his most famous clients were Shirley Bassey, the Beatles and Tom Jones. Elsa was born in the United Kingdom, to an Anglican family.Collins was educated at Francis Holland School in London, an independent day school for girls. She made her theatrical debut c. 1942, as a child actress. She had a role in a performance of the play "A Doll's House" (1879) by Henrik Ibsen (1828-1906). In 1949, Collins started training as an actress at the Royal Academy of Dramatic Art (RADA) in London. In 1950, she signed a contract with a British film studio, the Rank Organisation of businessman Joseph Arthur Rank, 1st Baron Rank (1888-1972).Collins made her film debut in the short film "Facts and Fancies" (1951), and her feature film debut in "Lady Godiva Rides Again" (1951), where she played an unnamed Beauty Queen Contestant. She had supporting roles as the Greek maid Marina in "The Woman's Angle" (1952) and gangster's moll Lil Carter in "Judgment Deferred" (1952).Collins had her big break when cast as juvenile delinquent Norma Hart in prison drama "I Believe in You" (1952). She was hailed as Britain's new "bad girl" and started being offered high-profile roles in British films. The next stage in her career started when cast as Princess Nellifer of Egypt in the historical epic "Land of the Pharaohs" (1955), an international production . While the film was not successful at the box office, it became a cult classic and Nellifer was one of Collins' most recognizable roles. Studio executive Darryl Francis Zanuck (1902-1979) was sufficiently impressed to offer Collins a 7-year-long contract with American studio 20th Century Fox. Collins took the offer.Collins' first American film was the historical drama "The Virgin Queen" (1955), where she shared the top-billing with established stars Bette Davis and Richard Todd. Collins then played the leading role of actress Evelyn Nesbit (1884/1885-1967) in the biographical film "The Girl in the Red Velvet Swing" (1955). The role was intended for established actress Marilyn Monroe, but Collins replaced Monroe based on a studio decision.Collins was placed on loan to studio Metro-Goldwyn-Mayer for her next role, that of gold digger Crystal in "The Opposite Sex" (1956). She received the top billing in the refugee-themed film "Sea Wife" (1956), and enjoyed box-office success with the interracial-love themed drama "Island in the Sun" (1957). In the drama film "The Wayward Bus" (1957), Collins received top-billing over her co-star Jayne Mansfield. Her next films included the spy thriller "Stopover Tokyo" (1957), the Western "The Bravados" (1958), the comedy "Rally Round the Flag, Boys" (1959), the caper film "Seven Thieves" (1960), and the biblical epic Esther and the King (1960).By 1960, Collins was one of 20th Century Fox's biggest stars, but she demanded a release from her studio contract. She had campaigned for the title role in the upcoming production of "Cleopatra", but the studio chose to cast Elizabeth Taylor in the role. Collins felt slighted. As a freelance actress for most of the 1960s, Collins had few film roles. Among her most notable roles was playing the leading lady in "The Road to Hong Kong" (1962), the last film in the long-running series "Road to ...". The male leads for the entire series were Bing Crosby and Bob Hope, but their usual leading lady Dorothy Lamour was considered too old for the role. Collins replaced Lamour.Collins started appearing frequently on television guest star roles. Among her most notable television roles was the villainous Siren in "Batman", and pacifist spokeswoman Edith Keeler in "Star Trek: The Original Series". Collins played in only one episode of Star Trek, the time-travel episode "The City on the Edge of Forever" (1967). However the episode is regarded among the best episodes in the entire Star Trek franchise, with Collins considered one of the most memorable guest stars in the original series.In 1970, Collins returned to her native United Kingdom. She started appearing frequently in British thriller and horror films of the decade. Among her films was revenge-themed drama "Revenge" (1971),science fiction film "Quest for Love" (1972), horror anthology "Tales from the Crypt" (1972), psychological horror "Fear in the Night" (1972), thriller "Dark Places", horror anthology "Tales That Witness Madness" (1973), and horror film "I Don't Want to