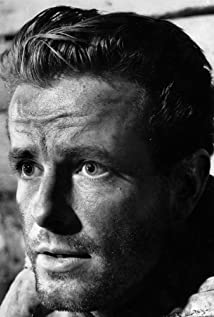 Joachim Hansen was the 'poster boy' for German movie officers in films of the 1950's and 60's. Masculine and of commanding presence, he portrayed such historical figures as Luftwaffe ace Hans Joachim Marseille in Der Stern von Afrika (1957) and Generaloberst Alfred Jodl in The Winds of War (1983) and War and Remembrance (1988). His many international credits as men in uniform include Captain Baumann in The Bridge at Remagen (1969), a British lieutenant caught up in a sectarian uprising in India in Kali-Yug, Goddess of Vengeance (1963) and a senior SS officer in The Eagle Has Landed (1976).A teacher's son, Hansen began his working career as an English and French translator. He studied acting at the Max Reinhardt Academy in Berlin and was spotted there by the director Alfred Weidenmann who starred him in his 1956 film debut. Thereafter, he rarely found himself out of uniform, but remained firmly in command just the same, as police inspectors (Het Geheim van de Zwarte Koffer (1962)), men of impeccable integrity (Via Mala (1961)) or outdoorsy heroes in romantic melodramas (Duel with Death (1959)). Hansen segued into character roles on the small screen during the 1970's and 80's. He emigrated to Canada in 1986, but returned to Germany for occasional theatrical appearances. He died in Berlin after suffering a stroke in September 2007, aged 77.

Fassbinder's World on a Wire - Looking Ahead to Today

The Eagle Has Landed

World on a Wire