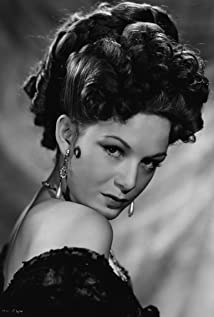 Vivacious, hazel-eyed, strawberry-haired Jean Kent was a popular star of British films in the 1940's and early 50's. The daughter of variety performers Norman Field and Nina Norre, she was convent-educated. By the age of ten, she accompanied her mother on tour, then spent several years in the chorus line at London's Windmill Theatre in the West End. Having honed her acting skills on the provincial repertory stage, Jean signed with Gainsborough Pictures in 1943. Her first noteworthy performance was in Man of Evil (1944) for which she received fifth billing. Through sheer determination and hard work, she quickly moved up the ladder to integral roles as willful 'scarlet women' in juicy melodramas. These were often parts other leading actresses refused to play, point in case her gypsy wildcat Rosal in Caravan (1946), considered even by Margaret Lockwood as 'too awful'. Using her training to best advantage, Jean performed some striking dance numbers in the film.She was the femme fatale wartime audiences loved to hate, an early British sex symbol, most effectively paired with the likes of Stewart Granger or James Mason. In one of her best-remembered performances, Jean took sole limelight as the titular star of the cautionary drama Good-Time Girl (1948), as a juvenile delinquent who falls in with spivs and gangsters and ends up in prison. However, within just a few years, Jean's box-office appeal had waned, possibly attributable to having portrayed a woman ten years older than herself in The Browning Version (1951) (though the film itself was a box-office and critical success). Her remaining screen career was thereafter confined to appearances on the small screen, from the much-derided soap opera Crossroads (1964), to playing Queen Elizabeth I in the excellent Sir Francis Drake (1961) or as Daphne Goodlace, potential seductress of both Albert and Harold, in Steptoe and Son (1962).

Shout at the Devil

The Prince and the Showgirl