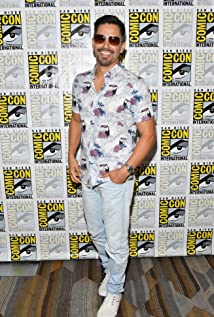 Carrying talent, the requisite good looks, and plenty of on-screen charisma, Jay Hernandez was born in Morelia, Mexico and grew up in Los Angeles, California, to Isis (Maldonado), an accountant and secretary, and Javier Hernandez, Sr., a mechanic. He is of Mexican descent. Jay had a serendipitous experience that led to his career. While riding an elevator in a high-rise in his native Los Angeles, the young man was approached by talent manager Howard Tyner, who suggested Hernandez had what it took to have a successful career in Hollywood. In 1998, he made his TV series debut as "Antonio Lopez", one of the high school basketball players in the NBC Saturday morning teen sitcom, Hang Time (1995), and stayed with the show for two seasons. Departing NBC, Hernandez moved to MTV with the short-term role of pizza delivery guy "Eddie" on the popular late-night serial, Undressed (1999), before segueing to the big screen. In 2001, Hernandez co-starred with Kirsten Dunst in the teen romance, Crazy/Beautiful (2001), portraying stalwart, straight-A high school student "Carlos Nunez", whose plans to attend the US Naval Academy are threatened by his growing attraction to a self-destructive rich girl, (Kirsten Dunst). He next appeared in Disney's surprise hit film, The Rookie (2002), as high school baseball team captain Joaquin "Wack" Campos. He also had a supporting role in the video-game-ish actioner, Torque (2004). Also in 2004, he was in the action-packed drama, Ladder 49 (2004), as "Keith Perez", and in the other action-packed drama, Friday Night Lights (2004). In 2006, he next starred in Eli Roth's Hostel (2005), a brutal horror flick about two American college buddies (Hernandez and Derek Richardson) lured to an out-of-the-way hostel in a Slovakian town rumored to house desperate, but beautiful Eastern European women. Following their wrong heads, both Americans get trapped in a truly sinister situation that plunges them into the dark recesses of human nature.

The Night Is Young