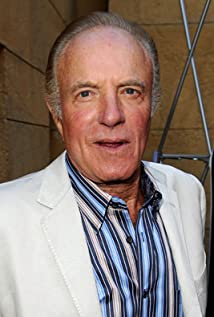 A masculine and enigmatic actor whose life and movie career have had more ups and downs than the average rollercoaster and whose selection of roles has arguably derailed him from achieving true superstar status, James Caan is New York-born and bred.He was born in the Bronx, to Sophie (Falkenstein) and Arthur Caan, Jewish immigrants from Germany. His father was a meat dealer and butcher. The athletically gifted Caan played football at Michigan State University while studying economics, holds a black belt in karate and for several years was even a regular on the rodeo circuit, where he was nicknamed "The Jewish Cowboy". However, while studying at Hofstra University, he became intrigued by acting and was interviewed and accepted at Sanford Meisner's Neighborhood Playhouse. He then won a scholarship to study under acting coach Wynn Handman and began to appear in several off-Broadway productions, including "I Roam" and "Mandingo".He made his screen debut as a sailor in Irma la Douce (1963) and began to impress audiences with his work in Red Line 7000 (1965) and the western El Dorado (1966) alongside John Wayne and Robert Mitchum. Further work followed in Journey to Shiloh (1968) and in the sensitive The Rain People (1969). However, audiences were moved to tears as he put in a heart-rending performance as cancer-stricken Chicago Bears running back Brian Piccolo in the highly rated made-for-TV film Brian's Song (1971).With these strong performances under his belt, Francis Ford Coppola then cast him as hot-tempered gangster Santino "Sonny" Corleone in the Mafia epic The Godfather (1972). The film was an enormous success, Caan scored a Best Supporting Actor nomination and, in the years since, the role has proven to be the one most fondly remembered by his legion of fans. He reprised the role for several flashback scenes in the sequel The Godfather Part II (1974) and then moved on to several very diverse projects. These included a cop-buddy crime partnership with Alan Arkin in the uneven Freebie and the Bean (1974), a superb performance as a man playing for his life in The Gambler (1974) alongside Lauren Hutton, and pairing with Barbra Streisand in Funny Lady (1975). Two further strong lead roles came up for him in 1975, first as futuristic sports star "Jonathon E" questioning the moral fiber of a sterile society in Rollerball (1975) and teaming up with Robert Duvall in the Sam Peckinpah spy thriller The Killer Elite (1975).Unfortunately, Caan's rising star sputtered badly at this stage of his career, and several film projects failed to find fire with either critics or audiences. These included such failures as the hokey Harry and Walter Go to New York (1976), the quasi-western Comes a Horseman (1978) and the saccharine Chapter Two (1979). However, he did score again with the stylish Michael Mann-directed heist movie Thief (1981). He followed this with a supernatural romantic comedy titled Kiss Me Goodbye (1982) and then, due to personal conflicts, dropped out of the spotlight for several years before returning with a stellar performance under old friend Francis Ford Coppola in the moving Gardens of Stone (1987).Caan appeared back in favor with fans and critics alike and raised his visibility with the sci-fi hit Alien Nation (1988) and Dick Tracy (1990), then surprised everyone by playing a meek romance novelist held captive after a car accident by a deranged fan in the dynamic Misery (1990). The 1990s were kind to him and he notched up roles as a band leader in For the Boys (1991), another gangster in Honeymoon in Vegas (1992), appeared in the indie hit Bottle Rocket (1996) and pursued Arnold Schwarzenegger in Eraser (1996).The demand on Caan's talents seems to have increased steadily over the past few years as he is making himself known to a new generation of fans. Recent hot onscreen roles have included The Yards (2000), City of Ghosts (2002) and Dogville (2003). In addition, he finds himself at the helm of the hit TV series Las Vegas (2003) as casino security chief "Big Ed" Deline. An actor of undeniably manly appeal, James Caan continued to surprise and delight audiences with his invigorating performances up until his death in July 2022 at the age of 82.