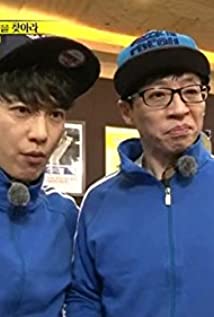 Yoo Jae-Suk is a South Korean comedian and television comedy show host. Nicknamed as "MC of the nation", people have voted him for the most popular Korean comedian for five consecutive years (since 2004). He has hosted several variety television shows in South Korea, including the hugely popular program Infinite Challenge & the current aired Running Man. Nicknamed "The Grasshopper", due to early appearances dressed as a grasshopper, he is now known for his quick wit and likability with most demographics, and has established himself as one of Korea's top comedians and TV personalities.Yoo Jae-Suk was born as the first child out of three (he has two younger sisters) on August 14, 1972 in Seoul, South Korea. Yoo Jae-Suk attended the Seoul Institute of the Arts, but had been unable to receive his degree due to his busy schedule as a comedian.His television debut was on the KBS Comedian Festival (for college students) in 1991, performing a parody of a commercial with Choi Seung-Gyung. In Infinity Challenge, him dancing to a cover of the song "Step by Step" by New Kids on the Block was shown as one of his early memorable moments. After nine years of hard times, in 2000, he hosted a program called Live and Enjoy Together, thanks to Choi Jin-Sil's recommendation. The program became instantly popular, and since then, Yoo Jae-Suk began to host many other variety programs. His potentiality was fully shown when he co-hosted a program called The Crash of MCs with Kang Ho-Dong, Lee Hui-Jae and Kim Han-Suk.His first Grand Prix was for a program called Happy Together Friends, which concept based on TV personalities trying to find their school friends (five of them) out of many (false friends) who are sitting behind the desk. The show brought reminiscence upon the viewers' school days, and became very popular. This Grand Prix is even more memorable, not just because it was Yoo Jae-Suk's first one, but it was from the broadcasting system where he debuted.He hosted the shows X-Man, which soon grew to be very popular, and thus one of the most viewed shows in Korea. During those times, he gained much more popularity and many programs began to nickname Yoo Jae-Suk as "MC of the Nation." However, after few years of constant airing, the program was canceled due to failing ratings as well as absence of new ideas, and Yoo Jae-Suk went on to host its replacement shows, New X-Man, Old TV (in which guests would re-enact classic TV series), and Haja! Go! (Let's Do It) for SBS, which were all canceled soon, due to low ratings on Sunday evening. However, X-Man has gone on to success in international syndication.Yoo Jae Suk is a part of the cast of the top-rated comic variety program Infinite Challenge, as the host-in-chief since 2005. Initially a six-member cast, Haha left the program as he was drafted to serve his mandatory military service and was replaced by Shinhwa's Junjin. The program wasn't popular when it first aired, but by the time Season 3 aired in 2006, the concept and format of "variety & reality program" became so popular, and Infinite Challenge became the forerunner of so many programs to follow with the same or similar format. Infinite Challenge is possibly the best program for Yoo Jae-Suk, for he met his wife Na Gyoung-Eun during season 2, and with the rising popularity and significant effect on general public, Yoo got even more famous. He ended up getting total of three Grand Prix (in 2006, 2007 and 2009) with the program.Yoo Jae-Suk also co-hosts Come to Play with Kim Won-Hee and Happy Together Season 3 with Park Myung-Soo, Park Mi-Seon and Shin Bong-Sun. Yoo Jae-Suk hosted these talk shows for a long period of time (both over 5 years), but the ratings have been constantly high throughout the years. Similar, yet very different, Yoo Jae-Suk tries his best to differentiate his hosting styles, both based on the guests and the settings they are situated in.After those replacement shows on SBS, on June 15, 2008, Yoo Jae-Suk, along with Lee Hyori, Yoon Jong-Shin, Kim Soo-Ro, Lee Chun Hee, Kang Dae-Sung, Park Ye-Jin and Kim Jong Kook (since episode 19) are the hosts and family members of Family Outing, part of SBS's Good Sunday lineup. Since then, Family Outing has become one of the top-rated shows in Korea, consistently achieving the highest ratings at Sunday mid-afternoon time-slot (especially during the first and second quarters of 2009). However, with various problems and scandals regarding the program, and by the end of 2009 and beginning of 2010, a rumor of Yoo jae-Suk not continuing his contract with Family Outing was raised. By the time of his contract expiration, Family Outing rating wasn't same as that of beginning of 2009, and Season 1 was brought to an end (on 2010.02.14 with Family Awards).On July 6, 2008, Yoo Jae-Suk married MBC announcer Na Gyung-Eun who has also worked on the show Infinite Challenge. Yoo Jae-Suk and his wife welcomed their first child, a son, on May 1, 2010.He is a Buddhist.From July 11, 2010,

Busted! I Know Who You Are!