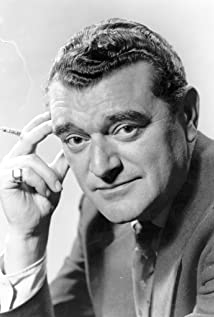 In Britain, special Christmas plays called pantomimes are produced for children. Jack Hawkins made his London theatrical debut at age 12, playing the elf king in "Where The Rainbow Ends". At 17, he got the lead role of St. George in the same play. At 18, he made his debut on Broadway in "Journey's End". At 21, he was back in London playing a young lover in "Autumn Crocus". He married his leading lady, Jessica Tandy. That year he also played his first real film role in the 1931 sound version of Alfred Hitchcock's The Phantom Fiend (1932). During the 30s, he took his roles in plays more seriously than the films he made. In 1940, Jessica accepted a role in America and Jack volunteered to serve in the Royal Welsh Fusiliers. He spent most of his military career arranging entertainment for the British forces in India. One of the actresses who came out to India was Doreen Lawrence who became his second wife after the war. Alexander Korda advised Jack to go into films and offered him a three-year contract. In his autobiography, Jack recalled: "Eight years later I was voted the number one box office draw of 1954. I was even credited with irresistible sex appeal, which is another quality I had not imagined I possessed." A late 1940s film, The Black Rose (1950), where he played a secondary role to Tyrone Power, would be one of his most fortunate choices of roles. The director was Henry Hathaway who Jack said was "probably the most feared, yet respected director in America, for he had a sharp tongue and fired people at the drop of a hat. Years later, after my operation when I lost my voice, he went out of his way to help me get back into films. What I did not know was that during the filming of 'The Black Rose' he was himself suffering from cancer." In the 1950s came the film that made Hawkins a star, The Cruel Sea (1953). Suffering from life long real life sea sickness, he played the captain of the Compass Rose. After surgery for throat cancer in 1966, requiring the removal of his larynx, Jack continued to make films. He mimed his lines and the voice was dubbed by either Charles Gray or Robert Rietty. His motto during those last years came from Milton's "Comus", a verse play in which he acted early in his career in Regent's Park. The lines: "Yet where an equal poise of hope and fear does arbitrate the event, my nature is that I incline to hope, rather than to fear."

The Adventures of Gerard