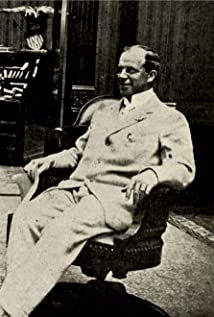 J. Stuart Blackton came to the US with his family from Sheffield, England, in 1885 at age 10, settling in New York. He became friends with Albert E. Smith - who later became his business partner and headed Vitagraph Studios - in 1894 and they started a short-lived vaudeville act together. Blackton went to work as a reporter for the "New York Evening World" newspaper, and an interview with Thomas A. Edison one day in 1896 piqued his interest in the film business. He later quit his job at the paper and bought a Kinetoscope projecting machine from Edison. He and his ex-vaudeville partner Smith joined forces and exhibited films all over the city, a venture that proved so profitable they quickly moved from exhibition to production. They made their first film in 1898, The Burglar on the Roof (1898), for release through Edison, but soon became disenchanted with that company (in addition to becoming involved in legal wrangling with it) and began their own company, American Vitagraph, with partner William T. Rock in 1900. Blackton acted in some productions but his main focus was in directing. He eventually left that field and became supervisor of all of the company's productions. He left the company in 1917 to go into independent production. He also worked as a director for hire for many studios, but did a lot of work for Warner Bros. He died in a car accident in California in 1941.

The Life and Death of King Richard III

Winsor McCay, the Famous Cartoonist of the N.Y. Herald and His Moving Comics

The Twentieth Century Tramp; or, Happy Hooligan and His Airship

Panoramic View of Boston Subway from an Electric Car

Ülke: ABD
Aka: The Artist's Dilemma; or, What He Saw in a Nightmare
Tür: Kısa Metraj, Kurgu
Yönetmen: Edwin S. Porter,
Oyuncular:

Mysterious Cafe, or Mr. and Mrs. Spoopendyke Have Troubles with a Waiter