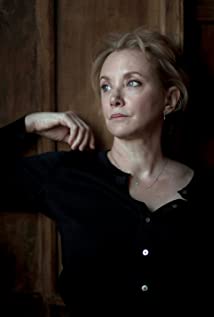 Actress J. Smith-Cameron was born Jean Isabel Smith in Louisville, Kentucky, and raised in Greenville, South Carolina, the daughter of an architect. She was known simply as J. Smith by her fellow students at Florida State University School of Theatre program in the mid-1970s. Despite her age, she made for a completely believable teenage Anne Frank in "The Diary of Anne Frank", was a touching and memorable Helen Keller in "The Miracle Worker", was wonderfully bizarre as Honey in "Who's Afraid of Virginia Woolf?" and demonstrated great skill and versatility in an all-female version of "The Taming of the Shrew". Smith's older sister, actress Jo Ann Smith (who later became a teacher), also attended FSU at the same time and performed in a production of the classic Iranian allegory, "The Butterfly" ("Shaparak Khanoom") by Bijan Mofid and directed by his actor/brother, Ardavan Mofid.She made her film debut while studying at FSU, starring in the acclaimed low-budget production of Gal Young Un (1979), directed by Victor Nunez, who later directed Ulee's Gold (1997). The film, shot in Florida, starred and featured several fellow FSU alumni, including David Peck, Marc H. Glick, Tim McCormack, Gil Lazier (FSU acting teacher), and Randy Ser (who later won an Emmy as production designer for the Whitney Houston version of Cinderella (1997)). The film was not released until 1979, several years after her college graduation. Following college, she added the hyphenated Cameron to her moniker as both a tribute to her great-grandmother and to avoid confusion once she joined Actors' Equity.As "J. Smith-Cameron", she made her Broadway debut as the crazy, suicidal "Babe" in Beth Henley's "Crimes of the Heart" (as a replacement). She went on to make an award-worthy New York impression with a Tony nomination for "Our Country's Good" (1991), winning an Outer Critics Circle award for "Lend Me a Tenor" (1989), and an Obie for her no-holds-barred performance in "As Bees in Honey Drown" (1997). Other stage successes have included "Wild Honey", "The Memory of Water", "Night Must Fall", "Tartuffe", and "After the Night and the Music".Her TV and film work has become stronger and more frequent with each decade. She has shown that, even in the smallest role, she can draw attention to herself, as evinced by her hysterically funny bit as a sexual compulsive in the gay film Jeffrey (1995). She has played various wife and/or mother parts, some more stable than others, in such films as Mighty Aphrodite (1995), Harriet the Spy (1996) and The Rage: Carrie 2 (1999). She also had strong roles in TV guest spots on such shows as The Days and Nights of Molly Dodd (1987), in a recurring role, plus such East Coast-based television series as "The Equalizer", "Homicide: Life on the Street", "Spin City", and "Law & Order".She met and married playwright/film writer Kenneth Lonergan. They have a daughter, Nellie, who was featured as Mabel, the secretary, in Lonergan's Oscar-nominated breakthrough play-turned-film You Can Count on Me (2000), which made film stars out of Laura Linney and Mark Ruffalo, and was particularly effective in Margaret (2011). Other film projects have included The First Wives Club (1996), In & Out (1997), Bittersweet Place (2005), Man on a Ledge (2012), Like Sunday, Like Rain (2014), and, most recently, True Blood (2008) (as a shape-shifter), as a tormented mother in Rectify (2013), and as "Gerri" in the social drama Succession (2018).

Man on a Ledge