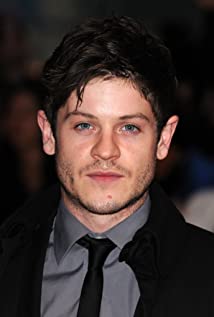 Iwan Rheon (born 13 May 1985) is a Welsh actor, singer and musician, best known for portraying Ramsay Bolton in the HBO series Game of Thrones (2011), Simon Bellamy in the E4 series Misfits (2009) and Ash Weston in the ITV sitcom Vicious (2013).Rheon was born in Carmarthen, Carmarthenshire. When he was five years old, his family moved to Cardiff. He attended Ysgol Gyfun Gymraeg Glantaf where he began acting in school drama productions at age 17. He was later spotted at a National Eisteddfod of Wales, before studying at the London Academy of Music and Dramatic Art.At age 17, Rheon joined Welsh language soap Pobol Y Cwm, in which he originated the role of Macsen White, but later left to train at LAMDA. His first notable stage part came in Eight Miles High, which was staged in 2008 at the Royal Court Theatre in Liverpool.Also in 2008, he was cast as the haunted Moritz Stiefel in the London production of the Tony Award-winning rock-musical, Spring Awakening. He played this role from January 2009 at the Lyric Hammersmith and continued when the show was transferred to the Novello Theatre, until it closed in May 2009, five months earlier than planned. He earned a What's on Stage Award nomination for Best Supporting Actor in a Musical, which was eventually won by Oliver Thornton (Priscilla Queen of the Desert). For his performance he won the award for Best Supporting Actor in a Musical at the 2010 Olivier Awards. Immediately after Spring Awakening, Rheon was cast in the E4 channel's Misfits, a BAFTA winning program that was described by 247 Magazine as "a mix of Skins and Heroes". He plays nervous, shy Simon Bellamy, who gains the superpower of invisibility and precognition in season 3. On 20 December 2011, Rheon announced via Twitter that he had left the show, along with fellow cast member Antonia Thomas.In 2011 he also appeared in the final episode of Secret Diary of a Call Girl. In 2011, he was nominated for a Golden Nymph in the "Outstanding Actor - Drama Series" category for his role in Misfits as Simon Bellamy. Rheon also made two guest appearances as the character Ben Theodore in Simon Amstell's comedy Grandma's House.In early 2012, Rheon filmed the crime heist drama The Rise. In spring 2012, he began shooting Libertador in Venezuela and Spain. He plays Daniel O'Leary. In May 2012, it was announced that he had signed on to the gritty drama Driven.In 2013, Rheon was cast as the villainous psychopath Ramsay Bolton in the HBO series Game of Thrones. In the DVD commentary for the series' third season, producers David Benioff and D.B. Weiss mentioned that Rheon previously auditioned for the role of Jon Snow in the first season, but lost to Kit Harington, with whom Rheon maintains a close friendship. Due to the vile nature of Bolton's character Rheon said that Bolton deserved his gruesome death in the series, in which he was eaten alive by dogs. He also portrays Ash Weston in the ITV sitcom Vicious.In 2013, Rheon played a lead role in the philosophical radio play, Darkside, based on the themes of Pink Floyd's The Dark Side of the Moon album.In September 2014, Rheon joined the cast of BBC One's Our Girl as Dylan "Smurf" Smith.Songwriting and singing since the age of 16, Rheon was lead singer in The Convictions until leaving the band to pursue his acting career. In 2010, he recorded his first solo work, Tongue Tied EP, at RAK Studios in London, produced by Jonathan Quarmby and Kevin Bacon. The EP, a four track release with acoustic guitar and voice, was released digitally in June 2010.He returned to RAK Studios, in April 2011, to record his second EP Changing Times, again produced by Quarmby and Bacon, with the addition of three backing musicians. Changing Times was released on 10 October 2011.On 7 April 2013, Rheon released his third EP Bang! Bang! and on 9 April 2013, released the music video for the title track.Rheon recorded his first album Dinard at RAK Studios in London and Ty Cerdd Studios in Wales. The album was released in April 2015.Rheon is fluent in Welsh and English, with the former being his first language. His older brother, Aled is a musician; the two performed together on the 2015 single "Rhodd".