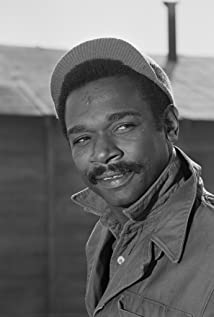 Ivan Dixon was a handsome, mustachioed African-American actor and director who carried a strong, serious nature about his solid frame. He initially earned attention in groundbreaking stage and film work with pronounced themes of social and racial relevance. He would become better known, however, for his ensemble playing in the nonsensical but popular WWII sitcom Hogan's Heroes (1965). His character was a POW radio technician with the last name of Kinchloe, and the role, while heightening his visibility, did little to satisfy his creative needs. Overshadowed by the flashier posturings of stars Bob Crane, Werner Klemperer and John Banner, Ivan eventually left the series after season five (of six), the only one of the original cast to do so. He was among the few African-American male actors in the 1960s, along with Bill Cosby and Greg Morris, to either star or co-star on a major TV series.Born Ivan Nathaniel Dixon III on Monday, April 6, 1931, in New York's Harlem area, where his parents originally owned a grocery store, Ivan grew up in the South and as a youngster was headed towards a life of crime before he took a keen interest in acting. This helped him to get back on the straight and narrow, studying dramatics at Lincoln Academy, a black boarding school in Gaston County, North Carolina. He then graduated from North Carolina Central University (in Durham) with a degree in drama in 1954.Ivan's Broadway debut occurred three years later in William Saroyan's "The Cave Dwellers", and in 1959 his career took a significant jump after earning the role of Joseph Asagai, the well-mannered Nigerian-born college student, in Lorraine Hansberry's landmark drama "A Raisin in the Sun". Starring Sidney Poitier, it was the first play written by a black woman that was produced on Broadway. He and Poitier became lifelong friends, and Ivan's early film career included providing stunt double assistance for Poitier in The Defiant Ones (1958).Following minor film parts in the racially tinged Something of Value (1957) and Porgy and Bess (1959) (both of which starred Poitier), he and Poitier recreated their respective Broadway roles in the film version of A Raisin in the Sun (1961), which drew high marks all round. Ivan's most mesmerizing film role, however, came a few years later when he and renowned jazz singer Abbey Lincoln starred in the contemporary film drama Nothing But a Man (1964). Starring as a young, aimless railroad worker who gives up his job to marry a schoolteacher and minister's daughter (Lincoln), Ivan's character matures as he strives to build a noble, dignified life for the couple, who are living in the deeply prejudiced South. The film was hailed for its extraordinarily powerful portrayals of black characters and its stark, uncompromising script. The film, which was written by two white documentary filmmakers who spent time in the Deep South in the 1960s, was considered far ahead of its time. Dixon himself never found a comparable role in film again. During this time, he was cast in several TV dramas, with fine roles on "Perry Mason," "The Twilight Zone," "Laramie", "The Outer Limits" and several other series.Following another strong but secondary showing as Poitier's brother in the film A Patch of Blue (1965), Dixon won the role of Kinchloe on Hogan's Heroes (1965). While shooting the series, he managed to squeeze in the title role in "The Final War of Olly Winter," a dramatic special that earned him his sole Emmy nomination in 1967. After he decided to leave Hogan's Heroes (1965) after five seasons, his acting work was limited. Active in the civil rights movement (he served as a president of Negro Actors for Action), he steadfastly refused to play roles that he felt were stereotypical. Instead, he segued into directing and was a noted success, helping hundreds of television productions during the '70s and '80s, including "Nichols," "The Waltons," "The Greatest American Hero," "The Rockford Files," "Magnum, P.I.," "Quincy" and "In the Heat of the Night."Ivan also managed to direct films, including Trouble Man (1972) and the controversial crime drama The Spook Who Sat by the Door (1973), the story of the first black officer in the Central Intelligence Agency, who turns revolutionary. This blaxploitation-era movie did not do well upon initial release (the film's title being highly questionable) and was quickly pulled from theaters. It subsequently gained cult status.Throughout his career, Ivan actively worked for better roles for himself and other black actors. Among the honors he received were four NAACP Image Awards, the National Black Theatre Award, and the Paul Robeson Pioneer Award from the Black American Cinema Society.In his final years, Ivan battled kidney disease and died of a brain hemorrhage at age 76 in Charlotte, North Carolina. He was survived by his wife of 58 years, Berlie Ray, whom he met while both were college theater students. Two of their four children, Ivan Nathaniel IV and N'Gai Christopher,

Perry Mason: The Case of the Shooting Star