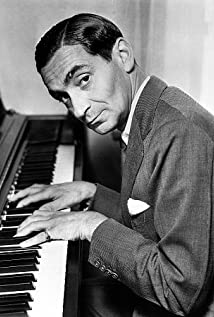 Irving Berlin was born Israel Isidor Baline on May 11, 1888 in Mogilev, Belarus, Russian Empire. Towering composer, songwriter, ("God Bless America", "Always", "Blue Skies", "White Christmas") author and publisher, he came to the United States at age 5 and was educated in New York's public schools. His earliest musical education was from his father, a cantor. He earned Honorary degrees from Bucknell University and Temple University. Beginning his career as a song-plugger for publisher Harry von Tilzer, Berlin worked as a singing waiter in Chinatown. In 1909, he was hired as a staff lyricist by the Ted Snyder Company, and became a partner to that firm four years later.In 1910, he began doing vaudeville appearances in the United States and abroad, and also appeared with Snyder in the Broadway musical "Up and Down Broadway", that ran for 72 performances. He joined ASCAP as a charter member in 1914, and served on its first board of directors between 1914-1918. Berlin enlisted the United States Army infantry in World War I, and was a sergeant at Camp Upton, New York. After the war, he established his own public-relations firm, and in 1921, he built the 1025-seat Music Box Theatre (at 239 W. 45th Street, New York) with Sam H. Harris. After Harris' death in 1941, Berlin assumed full ownership and the theatre remains a Broadway institution to this day.Among his many awards was the Medal for Merit for his 1942 all-soldier show "This Is the Army", which toured the United States, Europe and South Pacific battle zones; all proceeds were assigned to Army Emergency Relief and other service agencies. Berlin was also a member of the French Legion of Honor and held the Congressional Medal of Honor for "God Bless America", the proceeds from which went to the God Bless America Fund. His songs were sung by Fred Astaire, Al Jolson, Judy Garland, Bing Crosby, Dick Powell, Alice Faye and many others. Irving Berlin died at the age of 101 of natural causes on September 22, 1989 in New York City.

Annie Get Your Gun

This Is the Army