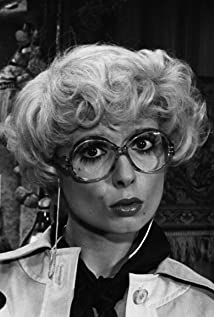 Ingrid Steeger was the third child of Kurt and Käthe Stengert, who already had son Udo and daughter Jutta. After school Ingrid worked as a secretary when she was discovered by photographer Frank Quade. Soon pinup photos of her appeared in numerous men's magazines, especially "SEXY", where even today she is the girl with the most cover shots. She was elected Miss Filmfestival (Berlin 1968) and soon was into movies herself. Her early films were cheap sex movies, mostly of the "Report" type. Not wanting to use her real name--because her father objected--and not yet having decided on a stage name, her first movie billed her as "Ingrid Stengel".Her "very" first movie deserves a special mention. Before the age of video, porn films for home viewing were Super 8 shorts, and Ingrid starred uncredited in one of those, Die perverse Herrin und ihre Opfer (1969) ("The Perverted Mistress and Her Victims"). This movie had long been forgotten when, at the height of her career, producer Gerd Wasmund (aka Mike Hunter) reissued it on video, retitled "Ingrid Steeger's Porno Action". She went to court to stop distribution and won. The same thing happened again when Beate Uhse distributed a collection of old naturalist shots of Ingrid, titled "Ingrid - blutjung und verführerisch" ("Ingrid--Youngblooded and Tempting"). Again she had to go to court to stop distribution. In addition to her movies, she was given small but serious roles in TV productions, where--strange as it might seem--nobody seemed to know about her sex films. Helmut Holger, one of her colleagues, suggested her to director Michael Pfleghar, who was casting for a new TV comedy series called Klimbim (1973), a German version of the American show Rowan & Martin's Laugh-In (1967). This was her breakthrough. The public loved her in her new role as "Klimbim-clown", and decent pictures of her appeared in women's and teen's magazines. The readers of Germany's biggest teen magazine, "BRAVO", awarded her the "Otto", its top award, four times. (1975: Bronze, 1976 & 1977: Silver, 1978: Gold). It seemed that nobody could stop her now.She followed "Klimbim" with Zwei himmlische Töchter (1978) ("Two Heavenly Daughters"), another successful comedy series, but flopped badly with Susi (1980) a third one, all directed by Pfleghar. From then on it was downhill for her. She went to France to live with her actor-friend Jean-Paul Zehnacker, but they soon separated. Ingrid returned to Germany to become a mature, serious actress, in the vein of her idols Shirley MacLaine and Goldie Hawn, but the public wouldn't let her. The same public that once had forgiven her sex-film past would not forget "Klimbim", though the series hadn't been shown for ages. Nearly every article on her began with "Ingrid Steeger, ex-clown ("Klimbim"), will ...".Michael Phlegar couldn't help her, either; he ran into severe personal problems and committed suicide a few years later. Though Ingrid can act, her few serious roles were doomed from the start. In recent years she has concentrated on theater and played mostly boulevard comedies. In 1995 she starred in the Karl May summer theater in Bad Segeberg as "Cowgirl Mona".Her private life has been rather chaotic, too. Her marriages, liaisons and affairs are well chronicled and always listed when she is seen with somebody new. When she first entered films she married cameraman Lothar E. Stickelbrucks in 1973, but they divorced two years later. She had an affair with director Michael Pfleghar, though neither one admitted it at that time (it was rumored that she even wanted to leave Germany to go to Hollywood with him). Next was Peter Koenecke, who organized safari tours in Kenya. They planned to marry in 1979 and move to Kenya together. She was even said to have learned Swahili. Next was French actor Jean-Paul Zehnacker, who starred with her in "Susi". She moved to live with him in France, but returned to Germany in 1984 when love turned to friendship. After him was Lothar Köllner (1985-86), owner of a hi-fi shop in Murnau, and she even obtained her driver's license at the age of 38 to see him more often. Then came film director Dieter Wedel (1988-91), whom she shared with another woman. At least he starred her in his TV series Wilder Westen inclusive (1988) and Der große Bellheim (1993), giving her a chance for some serious acting.Then she met Tom LaBlanc, an American Indian of the Dakota tribe, at a World Uranium hearing and they got married in a rush in August 1992. Nobody gave them much of a chance, because he didn't speak German and she didn't speak much English. Most photos show them side by side, Tom having to wear Indian clothing with feather headdress for the photographers, holding Ingrid's dachshund and looking very uneasy. Nevertheless, the press never accepted him. The couple was always referred to as "Ingrid and her Indian". Soon he was spending most of his time in America, fighting for the rights of his people, and Ingrid was left at home. Th

Three Men in the Snow

Schoolgirl Report Part 5: What All Parents Should Know

Housewives on the Job