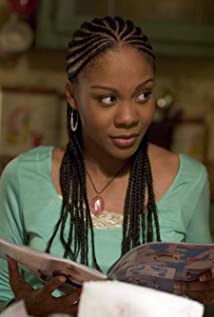 Indigo was born Alyssa Ashley Nichols in 1984, in Los Angeles, CA. Coming from an artistic family, she was exposed early on to various facets of the arts and attributes much of her interests in them to this.She booked her first commercial for Armour Hot Dog at age 5, and spent the next several years doing various student films and industrials, while simultaneously building up a reputation among casting directors in the industry.At age 10 she booked her first film role, playing opposite 'Louis Gossett Jr.', in the Showtime film, Zooman (1995); adapted from the play "Zooman and the Sign".During her freshman year in high school she was accepted from among applicants nationwide into the prestigious summer arts program; the California State Summer School for the Arts, (better known as CSSSA). In honor of her acceptance into this program, she was also made a recipient of the Governor's Medallion award.She auditioned and was accepted to the Los Angeles County High School of the Arts, (LACHSA), her junior year. It was during this time that she also decided to change her name to Indigo.Just before her junior year in high school however, Indigo took the CHSPE, (California High School Proficiency Exam), passed, and received her high school diploma a semester into the school year, prompting her to graduate a year and a half ahead of schedule.In recent years she's also established a name for herself on the voice-over scene, having done radio commercials for "McDonald's"; "U.S. Army"; "Nestle's Crunch" and "Geico", and having lent her voice to animation for the pilot episode of "Boondocks", where she played Huey; "Curious George" and several recurring gigs such as, "Oscar Meyer"; "McDonald's" and Family Guy (1999).From the time spanning from junior high school until now, Indigo has had guest star appearances on such shows as, Sister, Sister (1994); Chicago Hope (1994); NYPD Blue (1993); Crossing Jordan (2001); Judging Amy (1999); Girlfriends (2000); Strong Medicine (2000); Cold Case (2003); and CSI: Crime Scene Investigation (2000). She's had recurring roles on: Minor Adjustments (1995); Any Day Now (1998); Boston Public (2000); Buffy the Vampire Slayer (1997); and can be seen on Showtime's, Weeds (2005), which also earned her a SAG nomination for Outstanding Performance by an Ensemble in a Comedy Series, at the 2007 SAG awards.Her other interests include music and art.