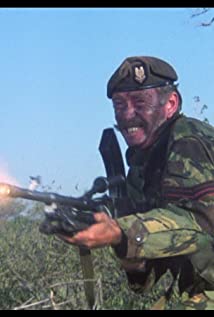 Ian Yule was a professional soldier for much of his adult life; a career soldier who saw service all over the world. He broke into films after working as an uncredited stunt man on two classics: Ben-Hur (1959) and The Longest Day (1962). His ease and familiarity with firearms, and his thorough knowledge of fighting men made him perfect for casting in action films and as a 'tough guy,' and he landed his first early parts in the late 1960s.By the 1970s, he was picking up regular work, generally in character roles with a gun in his hand. Early noticeable roles included Woods, a mercenary, in the Val Guest thriller Killer Force (1976) and Golden Rendezvous (1977) with Richard Harris. Yule worked with Harris again in The Wild Geese (1978), in which his previous military background made him perfect casting as the tough cockney sergeant Tosh Donaldson. In fact, Yule had once been a mercenary, serving in the Congo with Colonel "Mad" Mike Hoare's 5 Commando. His links with Hoare led to the latter being hired as military advisor on the film, while Yule doubled up as actor and weapons instructor.Later movies -- nearly all of them made in South Africa -- included the epic prequel Zulu Dawn (1979), Shamwari (1982), Safari 3000 (1982), and Jake Speed (1986), co-starring with John Hurt. Yule's recent credits have included a string of 'B' movies such as River of Death (1989), Point of Impact (1993), Merchant of Death (1997), and Traitor's Heart (1999).Ian Yule continues to reside in South Africa.