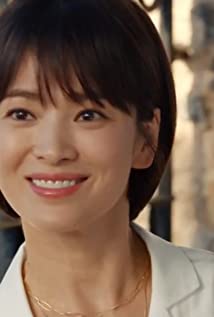 Song Hye-Kyo is a Korean actress. She gained popularity in Asia through her leading roles in television dramas Autumn in My Heart (2000), All In (2003), Full House (2004), That Winter, the Wind Blows (2013), Descendants of the Sun (2016) and Encounter (2018). Her film work includes Hwang Jin Yi (2007), The Grandmaster (2013), My Brilliant Life (2014) and The Queens (2015).In 2017, she ranked 7th in Forbes magazine's Korea Power Celebrity list, and 6th in 2018. The success of Song's television dramas internationally established her as a top Hallyu star.When Song was born, she was sick-her parents and doctors thought that she wouldn't survive. Upon her recovery, Song's parents registered her birth on February 26, 1982 (instead of her actual birth date, November 22, 1981).Song's parents divorced when she was a young girl, and was raised by her mother. They moved from her birthplace in Daegu to the Gangnam District in Seoul, where she trained as a figure skater in elementary school, but quit when she was in the eighth grade. Though Song considered herself shy and introverted, she was described by her high school teacher as having a "cheerful character, she mixed well with her friends and was always in a bright mood." She attended college at Sejong University, where she majored in film arts.In 1996, the 14-year-old Song, then a third-year junior high school student, won first place in the SunKyung Smart Model Contest, and she made her entertainment debut as a model for the school uniform company. This led to her being cast in a small role in her first television drama, First Love. She would continue appearing in a string of various dramas and sitcoms, notably Soonpoong Clinic. However, it wasn't until the KBS drama Autumn in My Heart with Song Seung-Hun and Won Bin that she rose to fame in Korea and throughout Asia. The romantic melodrama series was a ratings success, pioneering a trend in Korean melodramatic series and launching a fever that is commonly referred to as the "Korean Wave".In 2003, her popularity continued to climb when she played a leading role alongside Lee Byung-Hun in the gambling drama All In, which drew solid viewership ratings nationwide throughout its run with a peak viewer rating of 47.7 percent. The following year, she co-starred with singer Rain in the hit romantic comedy series Full House. The drama achieved pan-Asia success and established Song as one of the most well-known Korean actress in Asia.In early 2005, She went to San Francisco to study English and later traveled to Seattle. Song took time off to recharge herself after Full House. "I have had a good rest. It was a good opportunity to reflect on myself," said Song. She returned to Korea on March 5, 2005. The same year, She made her big-screen debut in My Girl and I (a Korean remake of Crying Out Love in the Center of the World), which was panned by audiences and critics alike. Vocal about her dissatisfaction with typecasting in the roles she was being offered, she took on different roles the following year.She made her TV comeback in late 2008 with The World That They Live In (also known as Worlds Within), a series set at a broadcast station in which Song and Hyun Bin played drama PDs who work together and fall in love.In 2010, she starred in Camellia, an omnibus pic made up of three short films directed by three Asian directors. Each episode is set in the past, present and future of the city of Busan. In the film's final segment Love for Sale, Song and Gang Dong-Won played former lovers who forget their memories about each other which later leads them to a fatal destiny.Considered one of Korea's most beautiful women, in early 2011 Song released the photo book Song Hye-Kyo's Moment which was shot by top photographers in Atlanta, New York City, Buenos Aires, Patagonia, Paris, the Netherlands and Brazil. Proceeds from the sales of the photo book was donated to a children's foundation.Song then played a documentary filmmaker who finds the strength to forgive the 17-year-old boy who killed her fiancé but instead of redemption, only finds greater tragedy in A Reason to Live, which was released in October 2011 after several delays. Song was a huge fan of director Lee Jung-Hyang and had actively sought her out. Though she had difficulty getting into character, she said she fell in love with the script and felt her acting had matured. She considers the film "a turning point" in her life.In 2011, she became the first Asian actress to sign a contract with French global agency Effigies, paving the way for her possible entry into the European market. She released a photo-essay book in 2012 titled It's Time for Hye-Kyo.Song reunited with the writer and director of Worlds Within in That Winter, the Wind Blows, a 2013 remake of 2002 Japanese drama Ai Nante Irane Yo, Natsu ("I Don't Need Love, Summer"). She played a blind heiress in the melodrama, opposite a con man pretending to be her long-lost brother (played by Jo In-Sung). That Winter, th

Descendants of the Sun

That Winter, The Wind Blows

The World That They Live In