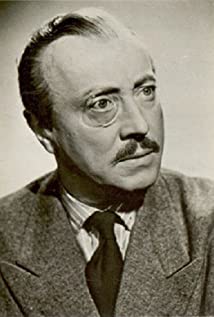 Complete with waxed moustache and monocle, bald, straight-backed Hubert von Meyerinck looked every inch a poster boy for Prussian militarism. A practised condescension and raspy, sometimes shrill delivery further added to this image. In fact, his grandfather had been a commanding general and his father an army major and landowner. "Hubsie" himself was supposedly destined for a career in the clergy. When he began to take acting classes, it was much to the chagrin of his conservative parents. Invalided out of military service in World War I due to a lung condition, he made his theatrical bow in Berlin in 1917. Following that, he spent two years at the Hamburg Kammerspiele (1918-20) before returning to Berlin for engagements on the legitimate stage and in cabaret, famously partnering an as yet 'undiscovered' Marlene Dietrich in the 1927 revue "Es liegt was in der Luft". He also enhanced his theatrical reputation with prominent roles as Mephisto in "Faust" and as Mack the Knife in Brecht's "Threepenny Opera".On the rare occasions he played the outright villain, "Hubsie" could be genuinely menacing. However, more often then not, the German cinema's busiest character actor used undeniable comic talent to parody his image and appearance. Audiences loved him as oily swindlers, impoverished aristocrats out to marry for money, bigamists, effete movie folk or obtuse officials. Despite at times overplaying his outrageous personae, he improved many a lesser picture by his quirky, scene-stealing antics. A shortlist of his more memorable efforts should include The Company's in Love (1932), When Love Sets the Fashion (1932), Bel Ami (1939), The Mad Bomberg (1957), Ein Mann geht durch die Wand (1959), The Haunted Castle (1960) and Billy Wilder's madcap farce One, Two, Three (1961). Between 1965 and 1969, "Hubsie" was given carte blanche to do his shtick as bumbling "Clouseau"-like Scotland Yard chief Sir Arthur in five enjoyably campy Edgar Wallace crime thrillers. He also continued to augment his prolific screen acting portfolio (294 appearances!) with frequent returns to the stage, his last being as ensemble member of the Thalia Theater in Hamburg from 1966 until his death from pneumonia in May 1971.

Glorious Times in the Spessart

The Man in the Black Derby