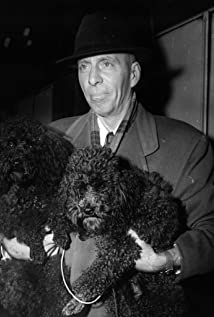 What do the classic films Scarface (1932), Twentieth Century (1934), Bringing Up Baby (1938), Only Angels Have Wings (1939), His Girl Friday (1940), Sergeant York (1941), To Have and Have Not (1944), The Big Sleep (1946), Red River (1948) Gentlemen Prefer Blondes (1953) and Rio Bravo (1959) have in common? Aside from their displays of great craftsmanship, the answer is director Howard Hawks, one of the most celebrated of American filmmakers, who ironically, was little celebrated by his peers in the Academy of Motion Picture Arts and Sciences during his career.Although John Ford--his friend, contemporary and the director arguably closest to him in terms of his talent and output--told him that it was he, and not Ford, who should have won the 1941 Best Director Academy Award (for Sergeant York (1941)), the great Hawks never won an Oscar in competition and was nominated for Best Director only that one time, despite making some of the best films in the Hollywood canon. The Academy eventually made up for the oversight in 1974 by voting him an honorary Academy Award, in the midst of a two-decade-long critical revival that has gone on for yet another two decades. To many cineastes, Hawks is one of the faces of American film and would be carved on any film pantheon's Mt. Rushmore honoring America's greatest directors, beside his friend Ford and Orson Welles (the other great director who Ford beat out for the 1941 Oscar). It took the French "Cahiers du Cinema" critics to teach America to appreciate one of its own masters, and it was to the Academy's credit that it recognized the great Hawks in his lifetime.Hawks' career spanned the freewheeling days of the original independents in the 1910s, through the studio system in Hollywood from the silent era through the talkies, lasting into the early 1970s with the death of the studios and the emergence of the director as auteur, the latter a phenomenon that Hawks himself directly influenced. He was the most versatile of American directors, and before his late career critical revival he earned himself a reputation as a first-rate craftsman and consummate Hollywood professional who just happened, in a medium that is an industrial process, to have made some great movies. Recognition as an influential artist would come later, but it would come to him before his death.He was born Howard Winchester Hawks in Goshen, Indiana, on Decoration Day, May 30, 1896, the first child of Frank Winchester Hawks and his wife, the former Helen Howard. The day of his birth the local sheriff killed a brawler at the town saloon; the young Hawks was not born on the wild side of town, though, but with the proverbial silver spoon firmly clenched in his young mouth. His wealthy father was a member of Goshen's most prominent family, owners of the Goshen Milling Co. and many other businesses, and his maternal grandfather was one of Wisconsin's leading industrialists. His father's family had arrived in America in 1630, while his mother's father, C.W. Howard, who was born in Maine in 1845 to parents who emigrated to the U.S. from the Isle of Man, made his fortune in the paper industry with his Howard Paper Co.Ironically, almost a half-year after Howard's birth, the first motion picture was shown in Goshen, just before Christmas on December 10, 1896. Billed as "the scientific wonder of the world," the movie played to a sold-out crowd at the Irwin Theater. However, it disappointed the audience, and attendance fell off at subsequent showings. The interest of the boy raised a Presbyterian would not be piqued again until his family moved to southern California.Before that move came to pass, though, the Hawks family relocated from Goshen to Neenah, Wisconsin, when Howard's father was appointed secretary/treasurer of the Howard Paper Co. in 1898. Howard grew up a coddled and spoiled child in Goshen, but in Neenah he was treated like a young prince. His grandfather C.W. lavished his grandson with expensive toys. C.W. had been an indulgent father, encouraging the independence and adventurousness of his two daughters, Helen and Bernice, who were the first girls in Neenah to drive automobiles. Bernice even went for an airplane ride (the two sisters, Hawks' mother and aunt, likely were the first models for what became known as "the Hawksian women" when he became a director). Brother Kenneth Hawks was born in 1898, and was looked after by young Howard. However, Howard resented the birth of the family's next son, William B. Hawks, in 1902, and offered to sell him to a family friend for ten cents. A sister, Grace, followed William. Childbirth took a heavy toll on Howard's mother, and she never quite recovered after delivering her fifth child, Helen, in 1906. In order to aid her recovery, the family moved to the more salubrious climate of Pasadena, California, northeast of Los Angeles, for the winter of 1906-07. The family returned to Wisconsin for the summers, but by 1910 they permanently resettled in California, as gran

The Men Who Made the Movies: Howard Hawks

Land of the Pharaohs