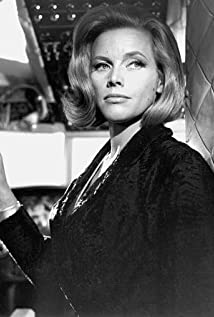 Comparing this sultry-eyed blonde to Greta Garbo and Marlene Dietrich may seem a bit overzealous, but Honor Blackman's stylish allure cannot be denied.One of four children, Blackman was born in London's East End, to Edith Eliza (Stokes), a homemaker, and Frederick Thomas Blackman, a statistician employed with the civil service. She received diction lessons as a teenager and later attended the Guildhall School of Music and Drama. She temporarily followed in her father's footsteps with a job in the civil service, and then was, of all things, a dispatch rider during World War II. This is where she developed some of her trademark athleticism.Blackman received her first acting work on stage in London's West End as an understudy for "The Guinea Pig". She continued with roles n "The Gleam" (1946) and "The Blind Goddess" (1947), before moving into film. She debuted with Fame Is the Spur (1947), starring Michael Redgrave. In that picture, Blackman dies from a horse-riding accident. This film established the strange pattern wherein many of her movie characters meet untimely deaths. Signed up with the Rank Organisation, Blackman joined several other starlet hopefuls who were being groomed for greater fame. She was initially cast as demure, pleasant young things or "English Rose" types and received dependable but unmemorable costar billing in films such as Daughter of Darkness (1948) (1948), Quartet (1948), A Boy, a Girl and a Bike (1949) (1949), So Long at the Fair (1950) (1950) and Green Grow the Rushes (1951) (1951), the last starring a young Richard Burton. Hollywood also took brief notice when she was cast as the second lead femme in MGM's Conspirator (1949) (1949), starring Elizabeth Taylor and Robert Taylor.The stress and struggles of advancing her career coupled with a divorce from her first husband, Bill Sankey, caused Blackman to suffer a nervous collapse in the mid-1950s. After a brief time recovering in a hospital, she regained her health and began rebuilding her career with rather obligatory B-level fare, at first. That reentry culminated with a costarring role in one of the more famous retellings of the tragic "Titanic" tale, A Night to Remember (1958) (1958), costarring Kenneth More and David McCallum. Developing a solid footing again, she filmed The Square Peg (1958) (1959) with comedian Norman Wisdom and A Matter of WHO (1961) (1961) with Terry-Thomas.TV series work then also came her way, notably with the highly popular The Avengers (1961), co-starring Patrick Macnee as John Steed. As the leather-clad "Mrs. Cathy Gale", Blackman showcased her incredible beauty, self-confidence, and athletic derring-do. Her admirable qualities made her not only a catch for the men, but also an inspirational figure for the 1960s feminist movement. Blackman left the show at its peak, however, and was replaced by the equally assertive and popular Diana Rigg as Mrs. Emma Peel.Not out of work long, Blackman took on the role of Greek goddess Hera in popular movie adventure Jason and the Argonauts (1963) (1963) with marvelous Ray Harryhausen and melodrama Life at the Top (1965) (1965) with Laurence Harvey. She then filmed the most popular role of her career: "Pussy Galore". In the classic "James Bond" movie Goldfinger (1964) (1964), Blackman went toe to toe with Sean Connery's womanizing "007" and created major sparks on screen, managing to outclass the (wink-wink) double meaning of her character's name.That resurgence of popularity should have led to better film opportunities but did not. Blackman toiled for the most part in low-level melodramas and routine actioneers, including the western Shalako (1968); the adventure The Last Roman (1968); the romantic drama The Virgin and the Gypsy (1970); the horror opus To the Devil a Daughter (1976); and the whodunnit mystery The Cat and the Canary (1978).A different story on the theatrical front where she earned raves on stage as the blind heroine of the thriller "Wait Until Dark" as well as for her dual roles in "Mr. and Mrs.", a production based on two of Noël Coward's plays. She also enjoyed working occasionally with her second husband, actor Maurice Kaufmann, in the play "Move Over, Mrs. Markham" and the film thriller Fright (1971) with Susan George. She proved a throaty-voiced sensation in various musicals productions as well, such as "A Little Night Music", "The Sound of Music", "On Your Toes", and "Nunsense."Into the millennium, Honor was seen in such films as Bridget Jones's Diary (2001), Color Me Kubrick (2005), Reuniting the Rubins (2010), I, Anna (2012) and Cockneys vs Zombies (2012), as well as the British TV series "Midsomer Murders," "The Royal," "Coronation Street," "Casualty" and "You, Me & Them."Divorced from Kaufmann in 1975 (he died in 1997), Blackman never remarried. The couple adopted two children in the late 1960s, Lottie and Barnaby. At octogenarian age, the ever-lovely and still glamorous star performed frequently, working in the long-running English hit comed

Catch Me If You Can

Jack and the Beanstalk: The Real Story