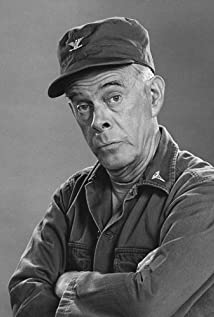 Harry Morgan was a prolific character actor who starred in over 100 films and was a stage performer. Known to a younger generation of fans as "Col. Sherman T. Potter" on M*A*S*H (1972). Also known for his commanding personality throughout his career, he tackled movies and television in a way no other actor would do it.Born Harry Bratsberg in Detroit, Michigan, to parents Henry Bratsberg, who immigrated from Norway, who was a mechanic, and Anna Olsen, a housewife who immigrated from Sweden. After graduating from Muskegon High School in Muskegon, Michigan, he took on a job as a salesman, before becoming a successful actor.In the many films, several of his most memorable movies, he appeared in were: in one of his firsts, The Omaha Trail (1942), in the next quarter of a century, he would also appear in The Ox-Bow Incident (1942), Wing and a Prayer (1944), State Fair (1945), Dragonwyck (1946), All My Sons (1948), Red Light (1949), Outside the Wall (1950), Dark City (1950) where he met future Dragnet 1967 (1967) co-star Jack Webb, who would be best friends until Webb's death, late in 1982, along with Appointment with Danger (1950). His films credits also include: High Noon (1952), The Glenn Miller Story (1954), Strategic Air Command (1955), among many others. He also co-starred with James Garner in Support Your Local Sheriff! (1969) and Support Your Local Gunfighter (1971).On television, he is fondly remembered as Spring Byington's jokingly, henpecked neighbor, "Pete Porter" on December Bride (1954), where he became the show's scene-stealer. It was also based on a popular radio show that it transferred into television. The show was an immediate success to viewers, which led him into starring his own short-lived spin-off series, Pete and Gladys (1960), which co-starred Cara Williams, who met Morgan in the movie, The Saxon Charm (1948).Morgan began his eight-year association with old friend, Jack Webb, and Universal, starting with Dragnet 1967 (1967), which he played Off. Bill Gannon. For the second time, like December Bride (1954) before this, it was an immediate hit, where it tackled a lot of topics. Dragnet was canceled in 1970, after a 4-season run, due to Morgan's best friend and co-star (Jack Webb) leaving the show to continue producing other shows, such as: Adam-12 (1968) and Emergency! (1972). Morgan would later work with Webb in both short-lived series, The D.A. (1971), opposite Robert Conrad and Hec Ramsey (1972), opposite Richard Boone. After those roles, Morgan ended his contract with both Universal and Mark VII, to sign with 20th Century Fox.Morgan's biggest role was that of a tough-talking, commanding, fun-loving, serious Army Officer, "Col. Sherman T. Potter" on M*A*S*H (1972), when he replaced McLean Stevenson, who left the show to unsuccessfully star in his own sitcom. For the third time, the show was still a hit with fans, and at 60, he was nominated for Emmies nine times and won his first and only Emmy in 1980, for Outstanding Supporting Actor. By 1983, M*A*S*H's series was getting very expensive, as well as with the cast, hence, CBS reduced it to 16 episodes. Despite M*A*S*H's finale in 1983, Morgan went on to star in a short-lived spin-off series AfterMASH (1983), co-starring Jamie Farr and William Christopher, from the original M*A*S*H (1972) series, without series' star Alan Alda.He also co-starred in 2 more short-lived series, as he was over 70, beginning with Blacke's Magic (1986) with Hal Linden and his final role with You Can't Take It with You (1987). That same year, he reprised his role, for a second time as "Off. Bill Gannon" in the film, Dragnet (1987), which starred Dan Aykroyd and Tom Hanks. Then, he guest-starred in several shows such as: The Twilight Zone (1985), Renegade (1992), The Jeff Foxworthy Show (1995), for the third time, he also reprised his "Off. Bill Gannon" role, supplying his voice on The Simpsons (1989). Towards the end of his acting career, as he reached 80, he had a recurring role as the older college professor on 3rd Rock from the Sun (1996), opposite John Lithgow. Afterwards, he retired from show business and lived with his family. Harry Morgan died on December 7, 2011, at age 96. On confirming his death, his son Charles, said that he had been recently treated for pneumonia. Morgan was also one of the oldest living Hollywood male actors.

3rd Rock from the Sun

Against Her Will: An Incident in Baltimore

The Flight of Dragons

Roots: The Next Generations