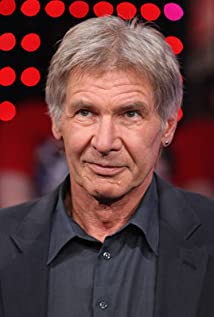 Harrison Ford was born on July 13, 1942 in Chicago, Illinois, to Dorothy (Nidelman), a radio actress, and Christopher Ford (born John William Ford), an actor turned advertising executive. His father was of Irish and German ancestry, while his maternal grandparents were Jewish emigrants from Minsk, Belarus. Harrison was a lackluster student at Maine Township High School East in Park Ridge Illinois (no athletic star, never above a C average). After dropping out of Ripon College in Wisconsin, where he did some acting and later summer stock, he signed a Hollywood contract with Columbia and later Universal. His roles in movies and television (Ironside (1967), The Virginian (1962)) remained secondary and, discouraged, he turned to a career in professional carpentry. He came back big four years later, however, as Bob Falfa in American Graffiti (1973). Four years after that, he hit colossal with the role of Han Solo in Star Wars: Episode IV - A New Hope (1977). Another four years and Ford was Indiana Jones in Indiana Jones and the Raiders of the Lost Ark (1981).Four years later and he received Academy Award and Golden Globe nominations for his role as John Book in Witness (1985). All he managed four years after that was his third starring success as Indiana Jones; in fact, many of his earlier successful roles led to sequels as did his more recent portrayal of Jack Ryan in Patriot Games (1992). Another Golden Globe nomination came his way for the part of Dr. Richard Kimble in The Fugitive (1993). He is clearly a well-established Hollywood superstar. He also maintains an 800-acre ranch in Jackson Hole, Wyoming.Ford is a private pilot of both fixed-wing aircraft and helicopters, and owns an 800-acre (3.2 km2) ranch in Jackson, Wyoming, approximately half of which he has donated as a nature reserve. On several occasions, Ford has personally provided emergency helicopter services at the request of local authorities, in one instance rescuing a hiker overcome by dehydration. Ford began flight training in the 1960s at Wild Rose Idlewild Airport in Wild Rose, Wisconsin, flying in a Piper PA-22 Tri-Pacer, but at $15 an hour, he could not afford to continue the training. In the mid-1990s, he bought a used Gulfstream II and asked one of his pilots, Terry Bender, to give him flying lessons. They started flying a Cessna 182 out of Jackson, Wyoming, later switching to Teterboro, New Jersey, flying a Cessna 206, the aircraft he soloed in. Ford is an honorary board member of the humanitarian aviation organization Wings of Hope.On March 5, 2015, Ford's plane, believed to be a Ryan PT-22 Recruit, made an emergency landing on the Penmar Golf Course in Venice, California. Ford had radioed in to report that the plane had suffered engine failure. He was taken to Ronald Reagan UCLA Medical Center, where he was reported to be in fair to moderate condition. Ford suffered a broken pelvis and broken ankle during the accident, as well as other injuries.

Witness to 9/11: In the Shadows of Ground Zero

Living in the Age of Airplanes