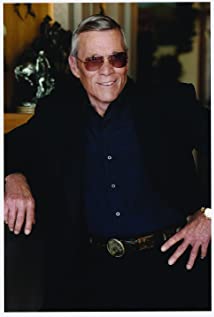 As the highest paid stuntman in the world, Hal Needham broke 56 bones, his back twice, punctured a lung and knocked out a few teeth. His career has included work on 4500 television episodes and 310 feature films as a stuntman, stunt coordinator, 2nd unit director and ultimately, director.He wrote and directed some of the most financially successful action comedy films, making his directorial debut with the box office smash, Smokey and the Bandit (1977). The ten features he directed include Hooper (1978) and The Cannonball Run (1981)... A real outlaw race from coast-to-coast, where he drove a fake ambulance that could peg the speedometer at 150 mph, on which the movie, "Cannonball Run", was based. He also set trends in movies - the first director to show outtakes during end credits.Needham wrecked hundreds of cars, fell from tall buildings, got blown up, was dragged by horses, rescued the cast and crew from a Russian invasion in Czechoslovakia, set a world record for a boat stunt on Gator (1976), jumped a rocket powered pick-up truck across a canal for a GM commercial and was the first human to test the car airbag.He invented and introduced to the film industry, the air ram, air bag, the car cannon turnover, the nitrogen ratchet, the jerk-off ratchet, rocket power and The Shotmaker Camera Car to make stunts safer and yet more spectacular at the same time.Needham revolutionized the art of the stuntman - from new devices and techniques, to conceptualizing the organization and execution of complicated action set pieces. To a large degree, he elevated the stuntman and his craft to become important and critical elements in contemporary American Film.He mentored a new generation of stuntmen and fought for the respect and recognition that stuntmen and stuntwomen deserve for their contribution to moviemaking.Life also got exciting outside of the movie business. Needham owned a NASCAR race team and was the first team owner to use telemetry technology. His Skoal-Bandit race team was one of the most popular NASCAR teams ever - second only to that of the King, Richard Petty. Needham set Guinness World Records and was the financier and owner of The Budweiser Rocket Car. The car is now on display in the Smithsonian's National Air & Space Museum.His many awards include an Emmy and an Academy Award.