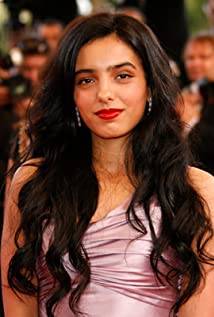 Hafsia Herzi , born in Manosque, is a French actress and director. She grew up in Marseille.Hafsia Herzi, of Tunisian origin by her father and Algerian by her mother, is the youngest of a family of four children (two brothers and a sister, Dalila).In 2019, she released her first feature film as a director, You deserve a love , followed by Bonne Mère two years later.Hafsia Herzi was only 13 years old when she landed a role, albeit a minor one, in Notes sur le rire, a TV movie for France 3 adapted from the novel by Marcel Pagnol. She followed this up with a few extra roles, and auditioned for the series Plus belle la vie and Sous le soleil; trials at the end of which she was not selected.It was in 2005 that her luck changed for the young actress: her meeting with Abdellatif Kechiche proved decisive, as he offered her the lead role in La Graine et le mulet, in which she brilliantly and sincerely played the character of Rym. A first try, a master stroke: Hafsia Herzi won the Marcello Mastroianni Prize at the 64th Venice Film Festival in 2007, and the César for the Best Female Hopeful (meilleur espoir féminin) in early 2008.Having never taken acting classes, she left Marseille and moved to Paris, where she enrolled in law at the university, took acting classes at the conservatory and even took diction classes to soften her Mediterranean accent. She decided to devote herself exclusively to the cinema, and quickly obtained the main roles in Française and L'Aube du monde, for which she learned Iraqi. In 2009, she plays under the direction of Francis Huster in Un homme et son chien, alongside Jean-Paul Belmondo before sharing the star with Jacques Dutronc for the fourth film of Xavier De Choudens: Joseph et la fille.The year 2011 seems to be the year of consecration for the young actress because we find it in the poster of four films and not least: Jimmy Rivière's Teddy Lussi-Modeste, Le Chat du rabbin where she lends himself to the exercise of dubbing, L' Apollonide - souvenirs de la maison - close de Bertrand Bonello et La Source des femmes by Radu Mihaileanu, alongside the much sought after Leïla Bekhti. In Hiam Abbass' Héritage, the actress plays the rebellious Hajar, the youngest daughter of the Arab family at the center of the film.More and more present on the screens, Hafsia Herzi multiplies projects and her roles gain importance, like her performances in Fugues marocaines, Le Sac de farine, Certifiée halal or Sex Doll. She also collaborates again with Abdellatif Kechiche on the two controversial Mektoub, my love. The actress also tastes the joys of the thriller via Persona non grata by Roschdy Zem, in which she gives the line to Nicolas Duvauchelle and Raphael Personnaz.In 2019, the actress directs her first feature film, Tu mérites un amour, in which she also plays the lead role.

Of Skin and Men