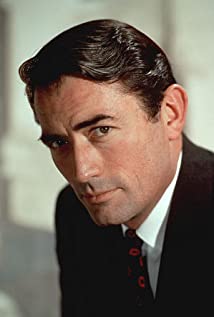 Eldred Gregory Peck was born on April 5, 1916 in La Jolla, California, to Bernice Mary (Ayres) and Gregory Pearl Peck, a chemist and druggist in San Diego. He had Irish (from his paternal grandmother), English, and some German, ancestry. His parents divorced when he was five years old. An only child, he was sent to live with his grandmother. He never felt he had a stable childhood. His fondest memories are of his grandmother taking him to the movies every week and of his dog, which followed him everywhere. He studied pre-med at UC-Berkeley and, while there, got bitten by the acting bug and decided to change the focus of his studies. He enrolled in the Neighborhood Playhouse in New York and debuted on Broadway after graduation. His debut was in Emlyn Williams' play "The Morning Star" (1942). By 1943, he was in Hollywood, where he debuted in the RKO film Days of Glory (1944).Stardom came with his next film, The Keys of the Kingdom (1944), for which he was nominated for an Academy Award. Peck's screen presence displayed the qualities for which he became well known. He was tall, rugged and heroic, with a basic decency that transcended his roles. He appeared in Alfred Hitchcock's Spellbound (1945) as an amnesia victim accused of murder. In The Yearling (1946), he was again nominated for an Academy Award and won the Golden Globe. He was especially effective in westerns and appeared in such varied fare as David O. Selznick's critically blasted Duel in the Sun (1946), the somewhat better received Yellow Sky (1948) and the acclaimed The Gunfighter (1950). He was nominated again for the Academy Award for his roles in Gentleman's Agreement (1947), which dealt with anti-Semitism, and Twelve O'Clock High (1949), a story of high-level stress in an Air Force bomber unit in World War II.With a string of hits to his credit, Peck made the decision to only work in films that interested him. He continued to appear as the heroic, larger-than-life figures in such films as Captain Horatio Hornblower R.N. (1951) and Moby Dick (1956). He worked with Audrey Hepburn in her debut film, Roman Holiday (1953). Peck finally won the Oscar, after four nominations, for his performance as lawyer Atticus Finch in To Kill a Mockingbird (1962). In the early 1960s, he appeared in two darker films than he usually made, Cape Fear (1962) and Captain Newman, M.D. (1963), which dealt with the way people live. He also gave a powerful performance as Captain Keith Mallory in The Guns of Navarone (1961), one of the biggest box-office hits of that year.In the early 1970s, he produced two films, The Trial of the Catonsville Nine (1972) and The Dove (1974), when his film career stalled. He made a comeback playing, somewhat woodenly, Robert Thorn in the horror film The Omen (1976). After that, he returned to the bigger-than-life roles he was best known for, such as MacArthur (1977) and the monstrous Nazi Dr. Josef Mengele in the huge hit The Boys from Brazil (1978). In the 1980s, he moved into television with the miniseries The Blue and the Gray (1982) and The Scarlet and the Black (1983). In 1991, he appeared in the remake of his 1962 film, playing a different role, in Martin Scorsese's Cape Fear (1991). He was also cast as the progressive-thinking owner of a wire and cable business in Other People's Money (1991).In 1967, Peck received the Academy's Jean Hersholt Humanitarian Award. He was also been awarded the US Presidential Medal of Freedom. Always politically progressive, he was active in such causes as anti-war protests, workers' rights and civil rights. In 2003, his Peck's portrayal of Atticus Finch was named the greatest film hero of the past 100 years by the American Film Institute. Gregory Peck died at age 87 on June 12, 2003 in Los Angeles, California.

A Conversation with Gregory Peck

The Life and Times of Hank Greenberg