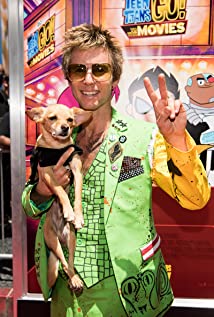 Best known for his supporting role as Dwight in Fast & Furious (2009) as well as his voice acting as 2012 Michelangelo in Teenage Mutant Ninja Turtles (2012-2017) and Beast Boy in Teen Titans Go! (since 2013), Gregory Michael Cipes realized his calling as an entertainer early in life. Having been born and raised in South Florida to a family of 9 brothers and sisters, Greg's inspiration to join the entertainment business was drawn from his thespian grandparents and TV director father. After dozens of roles in children's theater and numerous national commercials, made his professional off-Broadway acting and singing debut, starring as Young Solomon in the production "The Rothschild's" at the age of 13. At 16 he wrote, recorded and self produced his first single and eventual South Florida dance club hit with his band "Cipes and the People", whose album has since sold 60,000 copies plus. His new band, "Super Space Fighters" has been touted by critics as being a fresh take on Rock and Roll by mashing the sounds of the likes of the Beatles, Grateful Dead and Bob Marley (I). Cipes's new band has just started playing festivals across the United States.At the age of 17, Greg became nationally ranked as a Junior Professional surfer with an unheard of 13 corporate sponsors. He's been featured several surfing magazines, and has graced the cover of "Eastern Surf Magazine" while appearing in numerous advertising campaigns for his sponsors.Greg moved to Los Angeles in 2001, with nothing more than his beloved dog Timber, a guitar on his bad, and a surfboard. Since, he has starred in over 30 feature films such as "Fast & Furious (2009)", "Vile (2011)", "John Tucker Must Die (2006)", "Simon Says (2006)", "Pledge This! (2006)", "The Onion Movie (2008)", "Club Dread (2004)". His television appearances include "Ghost Whisperer (2005)", "Cold Case (2003)", "Gilmore Girls (2000)", Raines (2007)", "House (2004), "Bones (2005)", "Without a Trace (2002), "Samantha Who? (2007)". He has had recurring and series regular television roles on "The Middle (2009)", "Deadwood (2004), "One on One (2001)", "True Blood (2008)" and "Twentyfourseven (2006)", "Roseanne's Nuts (2011)", "CSI: Miami (2002)", "General Hospital (1963)" & "Anger Management (2012).Cipes has been dubbed the Crowned Prince of the Voiceover, having originally been discovered by 8 time Emmy Award-winning voice director Andrea Romano who cast Greg in his first cartoon role announcing "Greg has begun this ridiculously huge voice-over career." Greg is now the voice of his childhood idol Michelangelo in Nickelodeon's new global hit series Teenage Mutant Ninja Turtles (2012). His animation roles have made him known universally in such immortal characterizations as "Beast Boy" in Teen Titans Go! (2013), "Kevin Levin" in Ben 10: Alien Force (2008), "Chiro" in Disney's "Super Robot Monkey Team Hyperforce Go!" (2004) , "Danny Rand/Iron Fist" in Ultimate Spider-Man (2012), "Caleb" in W.I.T.C.H. (2004), Atlas" in "Astro Boy" (2003), the unforgettable lion cub, "Ryan" in The Wild (2006) and recurring roles in Star Wars: The Clone Wars (2008) and Fish Hooks (2010) and Kick Buttowski: Suburban Daredevil (2010).Greg's latest projects include a bi weekly "speakeasy" concert of eclectic local bands called La La Land, which is held at the Hollywood lounge Bardot. As a celebration of the culture and community of Laurel Canyon, Greg has created and is hosting the 4th Annual "Love Street Festival", taking place in Laurel Canyon July 5th. Greg is also on the board of the "Kids Venice Basketball League Natural Leaders program" which is an outreach program based in Los Angeles where underprivileged youth are introduced to the practices and principles of organic gardening, Yoga, Surfing, sustainable living and meditation. He has started his own charity organization based in Los Angeles called "UnAmor" bringing homeless Children, the Elderly and dogs together. Greg continues to tour the world making autograph appearances, teaching meditation and playing music live at Comic cons.

Ben 10 vs. the Universe: The Movie