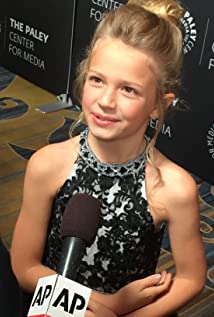 Giselle Eisenberg has quickly become one of film and television's most sought after young actors, impressively segueing between comedy and drama on both the big and small screens. Giselle currently stars as sassy, spunky, "tell-it-like-it-is", Sophia Hughes in CBS's hit comedy "LIFE IN PIECES".Giselle made her feature film debut at just 5 years old as daughter to Leonardo DiCaprio & Margot Robbie in "THE WOLF OF WALL STREET" (2013) directed by Martin Scorsese. Following this impressive start, she received rave reviews for her leading role of "Hope Donnelly" opposite Al Pacino, Jennifer Garner and Bobby Cannavale in "DANNY COLLINS", written and directed by Dan Fogelman. Critics said her performance as granddaughter to Mr. Pacino "offers one of the screen's most convincing portrayals of a kid with ADHD." They continued, she's "a child actor but a miracle of one; she's got comic-timing, makes funny faces and has real chemistry with Pacino." She "steals every scene she is in" and is "the film's biggest treat".Giselle's all-star experience continued in the critically acclaimed drama "A MOST VIOLENT YEAR" as youngest daughter to Jessica Chastain & Oscar Isaac, and in the hilarious comedy "SEX TAPE" as daughter to Cameron Diaz and Jason Segel. This holiday season, Giselle stars as "Gracie Foster" in "I'LL BE HOME FOR CHRISTMAS" alongside James Brolin and Mena Suvari.Additional television credits include: Guest Starring Roles in the award-winning STARZ drama series "FLESH & BONE" (recurring) as well as NBC's "LAW & ORDER SVU" and "BELIEVE" (recurring) as the lead's younger self - Young Bo Adams. Giselle has also lent her comedic skills to several national commercials for brands such as Kraft Mac & Cheese and Cheerios.Her first audition was for Holiday Inn and included eating a jelly donut and telling a joke. She got the part! Giselle was born in Poughkeepsie, NY. Her role on LIFE IN PIECES means splitting her time between Los Angeles and New Paltz, NY in the beautiful Hudson Valley. She loves swimming, skiing, rock-climbing, painting and enjoys playing the Cordoba guitar given to her as a gift from her "LIFE IN PIECES" & "I'LL BE HOME FOR CHRISTMAS" grandpa, James Brolin.Giselle credits her introduction to acting to her older sister, Julia.

The Enormity of Life