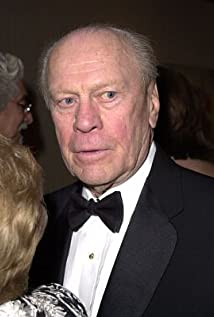 Gerald Rudolph Ford was the 38th President of the United States from August 1974 until January 1977.Ford was born on July 14, 1913, in Omaha, Nebraska as Leslie Lynch King, Jr., being the son of Leslie Lynch King and Dorothy Ayer Gardner King. His parents separated two weeks after his birth and his mother took him to Grand Rapids, Michigan to live with her parents. On February 1, 1916, his mother Dorothy married Gerald R. Ford, a paint salesman. The Fords began calling their son Gerald R. Ford, Jr. but the name became legal only on December 3, 1935. Aged 13, Ford knew that Gerald Sr., was not his biological father, but it wasn't until 1930 he met his biological father Leslie King, who had made an unexpected stop in Grand Rapids.Ford grew up in a family with three younger half-brothers, Thomas, Richard, and James. He attended South High School in Grand Rapids, where he already showed his athletics skills, being named to the honor society and the "All-City" and "All-State" football teams. As a scout he was ranked Eagle Scout in November 1927. He earned money by working in the family paint business and at a local restaurant.Ford attended The University of Michigan at Ann Arbor from 1931 to 1935. He majored in economics and political science and graduated with a B.A. degree in June 1935. He played on the University's national championship football teams in 1932 and 1933 and was voted MVP of Wolverine in 1934. He also played in All-Star and benefit football games. He denied offers from two professional football teams, (Detroit Lions and Green Bay Packers), but chose to become boxing coach and assistant varsity football coach at Yale hoping to attend law school there. Ford earned his law degree in 1941.After returning to Michigan and passing his bar exam, Ford set up a law partnership in Grand Rapids with Philip Buchen, a University of Michigan fraternity brother (who later served on Ford's White House staff as Counsel to the President).In April 1942 Ford joined the U.S. Naval Reserve and became a physical fitness instructor at a flight school in Chapel Hill, North Carolina. In the spring of 1943 he began service in the light aircraft carrier USS Monterey. Ford spent the remainder of the war ashore and was discharged as a lieutenant commander in February 1946. He returned to Grand Rapids to become a partner in the locally prestigious law firm of Butterfield, Keeney, and Amberg.His first political experience was in the summer of 1940 when he was working in the presidential campaign of Wendell Willkie. Six years later he decided to challenge Bartel Jonkman for the Republican nomination for the U.S. House of Representatives in the 1948 election. Ford won the nomination and after that was elected to Congress on November 2, 1948, receiving 61% of the vote.On October 15 1948, the height of the campaign, Ford married Elizabeth ('Betty') Anne Bloomer Warren, a department store fashion consultant. Betty was born on April 8, 1918 in Chicago, Illinois, but grew up in Grand Rapids. They subsequently had four children: Michael Gerald (March 14, 1950), John Gardner (March 16, 1952), Steven Meigs (May 19, 1956) and Susan Elizabeth (July 6, 1957).Ford served in the House of Representatives from January 3, 1949 to December 6, 1973. He was re-elected twelve times, winning each time with more than 60% of the vote. As his ambition was to become Speaker of the House already in the early 1950s, he denied offers to run for both the Senate and the Michigan governorship in these years. In 1961 he became chairman of the House Republican Conference. In 1963 President Johnson appointed Ford to the Warren Commission to investigate the assassination of President John F. Kennedy. He was the last living member of the Warren Commission.In 1965 Ford was chosen as the House minority leader, a post he held until 1973. As minority leader Ford made more than 200 speeches a year all across the country, which made him nationally known. He was not only a close friend of Richard Nixon for many years, but also a loyal supporter in both the 1968 and 1972 presidential elections. As in 1960, Ford was again considered as a vice presidential candidate in 1968. Because the Republicans did not attain a majority in the House, Ford was unable to reach his ultimate political goal, Speaker of the House. Instead, he became President of the Senate.Late in 1973 Spiro Agnew pleaded no contest to a charge of income tax evasion and resigned as Vice President. President Nixon was empowered by the 25th Amendment to appoint a new vice president and chose Ford. He was sworn in on December 6, 1973.On August 9, 1974, Nixon became the first president in U.S. history to resign from the office under the threat of impeachment in the Watergate scandal. The same day Gerald R. Ford took the oath of office as 38th President of the United States on August 9, 1974. Also in August 1974, Ford nominated Nelson Rockefeller for vice president, which nomination was confirmed by Congress on Dec

The World According to Dick Cheney

The President's Book of Secrets