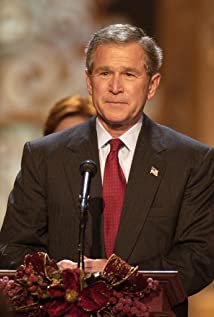 The 43rd President of the United States of America, George Walker Bush (known colloquially as "W" to distinguish himself from his father, George Bush, the 41st president of the U.S.), was born two days after the national holiday of the Fourth of July, 1946 in New Haven, Connecticut. There, his father was attending Yale College in the Class of 1949. His mother was Barbara Bush (the former Barbara Pierce), whom his father had married on January 6, 1945. "W" was their first child. Bush disliked being called "Junior" or Bush II, or even having the term "Jr." abbreviated next to his name.Initially, W's prospects of living up to his illustrious pedigree were dim. Possibly hobbled by dyslexia (a condition little understood and seldom treated during his childhood), Bush proved an uninspired student in high school. He did maintain a gentlemanly "C+" average at Yale and acquired a Masters of Business Administration degree from Harvard Business School, but until he turned 40, he seemed to be floundering. He admittedly had a drinking problem in his youth, but a late marriage to Laura Welch helped stabilize him. His rebirth as a believing Christian (he is a Methodist whereas his parents were Episcopalian) in 1986 helped put him on the straight and narrow path that led him to the Presidency.Bush has been discounted many times in his life and career for being wooden and unintelligent due to his fractured speaking style, but in fact, his academic performance was on par if not slightly better than that of his better-spoken, fellow Yalie John Kerry. As Bush's test scores and subsequent achievements suggest an above average intelligence, it is appropriate to believe that he likely has benefited from other's underestimation of his gifts. This was apparent in the first televised debate with Al Gore in 2000, when Bush held his own against the condescending vice president, and in doing so, triumphed in the eyes of the political handicappers.After W. turned his life around in the late 1980s, he began achieving success on his own, though that success inevitably was indebted to his social position and his father's business and political connections, particularly after he himself ascended to the Presidency after the expiration of Ronald Reagan's second term. The first President Bush (Bush 41, as he is colloquially known) had great connections in the Middle East, particularly with the Saudi royal family and the powerful Bin Laden clan. Using his father's Saudi connections, Bush Jr. became a millionaire twice over through Middle Eastern oil projects. His most notable achievement in private life was in becoming president and chief operating partner of the Texas Rangers professional baseball team, which was financially invigorated by the building of a new stadium with taxpayers' funds. For a man whose greatest ambition was not the presidency but to be baseball commissioner, the "job" of Rangers owner suited him just fine, and his stint as the amiable owner of the team helped generate good publicity that wiped out his past image as a playboy. When he cashed out his ownership stake, Bush had a $14 million profit. More importantly, ownership of the Rangers positioned him financially and in the public eye for a successful run for the governorship of Texas, which proved to be his springboard to the presidency.Under the quirky Texas constitution, the governor of Texas is primarily a ceremonial position, somewhat akin to that of the president in a Parliamentary system. The true political power in Texas lies with the lieutenant governor, who acts as a prime minister (or provincial premier in Canada) in that that he/she runs the legislature. In a life characterized by luck, the capricious Bush was luckier still in that he was told by the lieutenant governor, a Democrat, that he would make Bush a great governor if he would let him. Bush did and established an enviable reputation, one that crossed both party lines in Texas, where it would have been futile for the governor to act in a partisan fashion.With his father's Eastern Establishment credentials that linked him to the "Rockefeller Republicans" (conservative on financial matters, liberal on social issues) and his mother's own noted social liberalism, Bush was seen as being a moderate with a difference. That difference was his connections to the powerful evangelical Christian wing of the Republican Party, due to his own rebirth as a believing Christian and his immersion in day-to-day Texas politics. In the Sun Belt, fundamentalists and evangelicals were considered ordinary, run-of-the-day folk, not the exotics that Washington and the Eastern Establishment looked at them as.With a foot in both wings of the party, Bush was seen as a natural candidate for president after Bob Dole's dolorous 1996 candidacy. That he was a "straight shooter" with no scandal attached to him since his misbegotten youth (which he had confessed to and had put behind him) made him attractive to the Republicans, who had tr

The Way I See It

The River and the Wall

Hell on Earth: The Fall of Syria and the Rise of ISIS