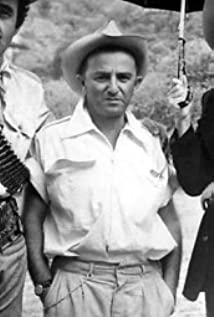 American second feature director George Sherman arrived in California aboard the SS Mongolia (bound from New York City, where he was born), on which he served as a bellboy. He began his career in the movie business in the mail room at Warner Brothers before working his way up to assistant director. By 1937, he had graduated to directing in his own right under contract to Republic Pictures. Sherman specialized almost exclusively in "B" westerns there (including the "Three Mesquiteers" series, which featured a young John Wayne). He also made occasional forays into action and horror themes, often managing to achieve a sense of style over substance. 'Variety', commenting on his handling of the "Mesquiteers" series, singled out his ability to imparting a "poetry in motion" to his "unified timing of cowboys mounting, riding, wheeling, galloping and dismounting of steeds" (July 2 1939). From 1940, Sherman also served as associate producer on many of his films.The diminutive (5'0") Sherman turned out reliable low-budget fare for Columbia between 1945-48, then moved on to do the same at Universal for another eight years. After that, he turned to freelancing and working in television. The only "A"-grade products to his credit were two westerns, both starring John Wayne: The Comancheros (1961) (as producer) and Big Jake (1971) (as director, although Wayne took over when Sherman fell ill).

The Wizard of Baghdad

The Last of the Fast Guns

The Treasure of Pancho Villa