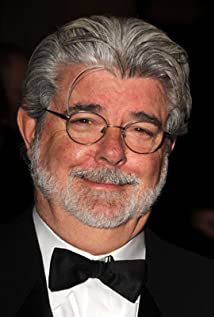 George Walton Lucas, Jr. was raised on a walnut ranch in Modesto, California. His father was a stationery store owner and he had three siblings. During his late teen years, he went to Thomas Downey High School and was very much interested in drag racing. He planned to become a professional racecar driver. However, a terrible car accident just after his high school graduation ended that dream permanently. The accident changed his views on life.He decided to attend Modesto Junior College before enrolling in the University of Southern California film school. As a film student, he made several short films including Electronic Labyrinth THX 1138 4EB (1967) which won first prize at the 1967-68 National Student Film Festival. In 1967, he was awarded a scholarship by Warner Brothers to observe the making of Finian's Rainbow (1968) which was being directed by Francis Ford Coppola. Lucas and Coppola became good friends and formed American Zoetrope in 1969. The company's first project was Lucas' full-length version of THX 1138 (1971). In 1971, Coppola went into production for The Godfather (1972), and Lucas formed his own company, Lucasfilm Ltd.In 1973, he wrote and directed the semiautobiographical American Graffiti (1973) which won the Golden Globe and garnered five Academy Award nominations. This gave him the clout he needed for his next daring venture. From 1973 to 1974, he began writing the screenplay which became Star Wars: Episode IV - A New Hope (1977). He was inspired to make this movie from Flash Gordon and the Planet of the Apes films. In 1975, he established ILM. (Industrial Light & Magic) to produce the visual effects needed for the movie. Another company called Sprocket Systems was established to edit and mix Star Wars and later becomes known as Skywalker Sound. His movie was turned down by several studios until 20th Century Fox gave him a chance. Lucas agreed to forego his directing salary in exchange for 40% of the film's box-office take and all merchandising rights. The movie went on to break all box office records and earned seven Academy Awards. It redefined the term "blockbuster" and the rest is history.Lucas made the other Star Wars films and along with Steven Spielberg created the Indiana Jones series which made box office records of their own. From 1980 to 1985, Lucas was busy with the construction of Skywalker Ranch, built to accommodate the creative, technical, and administrative needs of Lucasfilm. Lucas also revolutionized movie theaters with the THX system which was created to maintain the highest quality standards in motion picture viewing.He went on to produce several more movies that have introduced major innovations in filmmaking technology. He is chairman of the board of the George Lucas Educational Foundation. In 1992, George Lucas was honored with the Irving G. Thalberg Award by the Board of Governors of the Academy of Motion Picture Arts and Sciences for his lifetime achievement.He reentered the directing chair with the production of the highly-anticipated Star Wars prequel trilogy beginning with Star Wars: Episode I - The Phantom Menace (1999) . The films have been polarizing for fans and critics alike, but were commercially successful and have become a part of culture. The animated spin-off series Star Wars: The Clone Wars (2008) was supervised by Lucas. He sold Lucasfilm to Disney in 2012, making co-chair Kathleen Kennedy president. He has attended the premieres of new Star Wars films and been generally supportive of them.