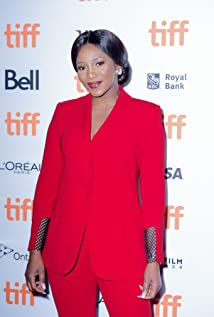 Genevieve Nnaji started her acting career as a child actress in the then-popular television soap opera "Ripples" at the age of 8. She was also featured in several commercials, some of which included Pronto beverage and Omo detergent. In 1998, at the age of 19, she made her debut in the growing Nigerian film industry with the movie "Most Wanted." As an upcoming actress, trying to create a niche for herself, she went through various minor roles seeking for that opportunity for a breakthrough.Her subsequent movies--"Last Party," "Mark of the Beast," and "Ijele" (which is still considered to be one of her best epic performances to date)--brought forth an icon to be loved and adored by many.Her name became a household name and her image the desire of every young girl. In 2002, she starred in the movie Sharon Stone (2002), and her fame shot beyond the shores of Nigeria to the rest of Africa and several European countries. One can say that through the buzz, Genevieve reinvented the Nigerian film Industry, introducing Nollywood to the rest of the world.Genevieve appeals just as warmly to Kenyans, Liberians, South Africans, and Ghanaians, who avidly watch Nigerian home videos at home and abroad. Genevieve has led the market into new territories today.She took the extra step of projecting herself beyond Nigeria by having a Web site constructed back in 2003, and it was arguably the most-visited Nigerian site on the Internet. Its fame spread like wildfire, a jolly virus: 3549 hits on 355 pages in two weeks.In recognition of her immense contribution to the Nigerian film industry, Genevieve was presented with numerous awards, some of which have been in Dublin, London, and the United States. She won best actress of the year in the 2001 City People Awards and in 2005 at the inaugural awarding of the prestigious African Movie Academy Awards (AMAA).In 2004, a search for the face of Lux was embarked upon, and out of several celebrities all over Africa, Genevieve emerged with the highest votes. She graced several billboards and television stations with her enduring smile and personality. The same year, she was contracted by a Ghanaian record label to record an album, which got immense attention locally and in several African countries.With several movies to her credit, and numerous fans around the world, in 2008, in a bid to give back to society, Genevieve launched her clothing line, St. Genevieve, which donates a percentage of its proceeds to charity--orphanages. In 2009, Genevieve made history by being the first Nigerian actress to be profiled on The Oprah Winfrey Show (1986) on an episode about the most popular people around the world. Genevieve is believed to be the highest-paid and most desired actress in Nollywood today.A desire to be in touch with her fans after being absent from the Web for about 6 years has resulted in the construction of a new site. This affords the actress the opportunity to keep in constant touch with her numerous fans the world over. The site is an interactive one. and the hits have been outstanding.Her life personifies the saying "All things are possible if you will only believe." These words describe her: determined, focused, humble, and creative. The best years of her career are still ahead.

Half of a Yellow Sun