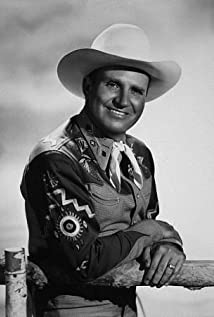 After high school Gene Autry worked as a laborer for the St. Louis and San Francisco Railroad in Oklahoma. Next he was a telegrapher. In 1928 he began singing on a local radio station, and three years later he had his own show and was making his first recordings. Three years after that he made his film debut in Ken Maynard's In Old Santa Fe (1934) and starred in a 13-part serial the following year for Mascot Pictures, The Phantom Empire (1935). The next year he signed a contract with Republic Pictures and began making westerns. Autry--for better or worse--pretty much ushered in the era of the "singing cowboy" westerns of the 1930s and 1940s (in spite of the presence in his oaters of automobiles, radios and airplanes). These films often grossed ten times their average $50,000 production costs. During World War II he enlisted in the US Army and was assigned as a flight officer from 1942-46 with the Air Transport Command. After his military service he returned to making movies, this time with Columbia Pictures, and finally with his own company, Flying A Productions, which, during the 1950s, produced his TV series The Gene Autry Show (1950), The Adventures of Champion (1955), and Annie Oakley (1954). He wrote over 200 songs. A savvy businessman, he retired from acting in the early 1960s and became a multi-millionaire from his investments in hotels, real estate, radio stations and the California Angels professional baseball team.

Riders in the Sky

Back in the Saddle